Clownface: The Coolest Assassin in Comics 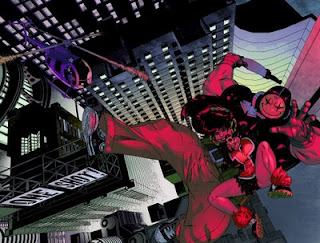 Sometimes certain images make such an impression on you that you never fully shake them. We creative types tend to soak up influences like a sponge. We all claim to aspire toward originality and our "own style" and yet we gleefully regurgitate the things that make us want to create. If we see something we like, we often shamelessly incorporate it into our own work. That we cannot often explain these things is part of our attraction to them. The more prominent ones stay with us into adulthood. 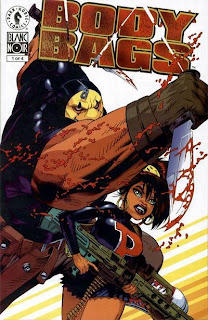 I discovered Jason Pearson's wonderful Body Bags while perusing Wizard magazine sometime in 1997. It was mentioned in a section that listed recent back issues that had seen spikes in their value. The cover art instantly grabbed my attention. Some hugely muscled guy wearing a "have a nice day" face for a mask, slicing and dicing with two equally giant knives dripping with blood. Just underneath him was a girl in a cheerleader outfit brandishing a helicopter mounted machine gun. The detailing on the gun was impeccable, and the robustly exaggerated character designs had a firm grounding in anatomy and dimension. I didn't know who the artist was, but I damn sure wanted to draw like him.

I went to the local comics shop and sought out every single back issue. A local shop in Yonkers called The Dragon's Den had them all for a reasonable price. I scooped them up and rushed home to read them. My experience was one of the very few times that the my anticipation was matched by the actual quality of the product. Entitled "Father's Day", the miniseries turned out to be a rollicking good time, right in line with the post Tarantino vibe of mid-1990's pop culture. The graphic violence reached nonsensical levels. It was a gift wrapped present for anyone who felt that comics had become too extreme. 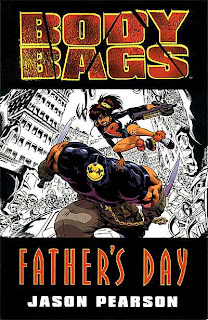 "Father's day" introduced us to the hulking behemoth of an assassin Mack Delgado (aka "Clownface". Mack was a walking wall of muscle with a most curious super ability. he could throw objects with such speed and force that exploded on impact. For this purpose, he carried around a pair of huge throwing knives. The story focuses on his reacquaintence with his estranged daughter Panda, who hoped to follow in the family business. The pair were like a forerunner to Big Daddy and Hit-Girl in Mark Millar's Kick-Ass.

The design of Clownface is what stuck out to me. He was a human wrecking ball that trampled anything in his path to bloody pulp. Aside from his physical size, his wardrobe also caught my attention: Creased khakis, Chuck Taylor Tennis Shoes and a watch chain. Was this an intentional allusion to the dress code of L.A. gangbagers? I'm all about pop culture and street culture references, and this one only Intrigued me further. Then there is the Smiley face. I read it as an intentional perversion of the sentiment meant to be conveyed by such a universal symbol. There is nothing "nice" about Clownface. Was it a reference to The Comedian from Alan Moore's Watchmen? Who cares? All I know is it worked.

I was also taken with the loving detail with which the firearms in the book were drawn. The fetishizing of weapons is essential for any hard boiled action story and Jason Pearson seemed to get that. 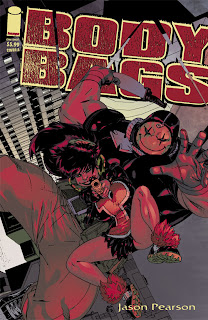 I've always been rather sporadic in terms of my comic collecting, so many things tend to slip under my radar. I missed just about anything else Body Bags related until 2009 at the New York Comic Con. I passed by a table that had the visage of Clown face and Panda emblazoned on multiple comic covers, none of which I had seen before. One of them had the Body Bags title in the same lettering style as Low Rider Magazine. I immediately snatched up each variant, hoping that this story was a fairly recent one and not simply a reprint of an older one (yes, I was so excited I neglected to skim through it. Sue me.) Thankfully this was a one shot filled with all new material and an amusing story that was every bit as fun as I remembered "Father's Day" being. The art was as crisp as ever. The magic was apparently still there. 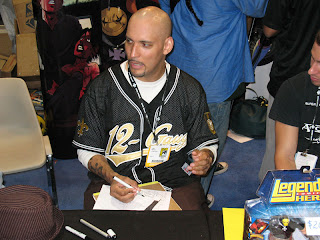 To this day, thanks to Jason Pearson, the shadow of Clownface looms large in my mind. Variations of the character find their way into my own sketches and story ideas. Why? I'd be hard pressed to try and articulate it. Perhaps it has something to do with the power fantasy wish fulfillment aspect that usually appeals to us manchildren. The character is a reminder how the most simply conceived and rendered images can make the old seem new again, and inspire others to create. Jason Pearson seems to understand that it's all in the design.
Posted by Unknown at 11:04 AM