Paranoia Texas Style: The Most Haunting Rap Video Ever 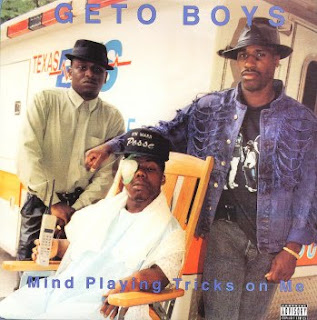 During the golden era, rap entered a stage where artists became more daring in their presentation. The synergy between Rap and movies became even more solidified. Many key rap albums of this period were cinematic in their scope and presentation. The inclusion of skits and intros, often consisting of dialogue driven sketches, provided the connective tissue that helped turn a collection of songs into a complete narrative.

The Rap videos of this era soon followed suit, reflecting both the artistic and commercial ambitions of the artists. Rappers and labels wanted visuals that would wow young rap fans and leave a lasting impression. Dudes making grandiose arm movements and glowering down into a camera just were not enough. Videos made by gangsta rappers were often more visionary than they were giving credit for, dabbling in descriptive story telling and bold imagery.

In 1991, Houston's Geto Boys broke through to the mainstream in a major way with the album We Can't Be Stopped. The cover photo, which showed the diminutive Bushwick Bill being rushed down a hospital corridor on a stretcher while nursing a grotesque gunshot wound to his right eye, forever solidified the groups place in pop culture infamy. At once tasteless and admirably bold bold, the visual communicated the gutter appeal of the Geto Boys music. Platinum sales followed not long after.

What really put the period at the end of the sentence, however, was the powerful first single and the video clip that accompanied it. "Mind Playing Tricks on Me", the haunting tour through three minds that have been racked with paranoia and fear. Built atop basic drums and a bluesy Issac Hayes Sample, the song begins with Faces penchant for gothic imagery.

The imagery gets even more stark, and builds to a bizarre and darkly comic verse by Bushwick. The Paranoia suffered by Face is a biproduct of him being neck deep in the dope game. Willie D is perhaps overly cautious yet able to laugh at how jumpy he gets at times. Bill is quite simply insane, suffering from violent delusions. the source of his psychosis is never divulged.

If that wasn't crazy enough, the video offered a literal interpretation of the song that employed imagery right out of a horror film. It left little room for imagination and showed you everything. Even though the clean version of the song played underneath it and graphic violence was not allowed in videos at that time, the grit still comes through. The video feels dirty despite it's considerable (for the time) production values.

It's gets under your skin. As you nod your head, you don't dwell on the lyrics too much as you don't want those images to get too comfortable in your head. It takes true inspiration to craft a beautiful nightmare, and The Geto Boys had just that.