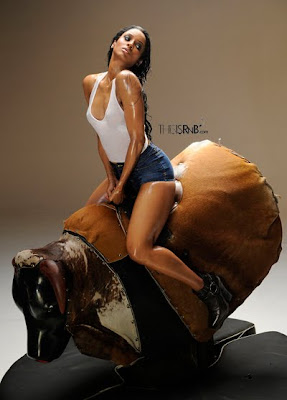 Simplicity is often the most effective mode of delivery. Get to the point and get there quick. Don't have any illusions about what your doing. Sell what your selling and be up front about it. If nothing else, your detractors will respect your honesty. Then again, maybe they'll just ban you.

The video for Ciara's latest single, "Ride" (featuring Ludacris), has been banned from Black Entertainment Television. The clip features a slim and flexible Ciara performing countless pelvic thrusts to the delight of heterosexual males everywhere, but BET was clearly unimpressed. This is rich coming from a channel that once aired the video for Nelly's "Tip Drill" countless times on the now defunct late night program Uncut. Pretty late in the in the game to be drawing lines in the sand, no?

Well, no one ever accused the more puritanical of us of consistency. Aside from the suggestive dancing the clip is pretty standard. I'm guessing even the guys who don't dig her music will be viewing this video over and over again, which is the point. Might as well just sit back and enjoy the eye candy. Either way, the clip is now available via CiaraVEVO on Youtube.