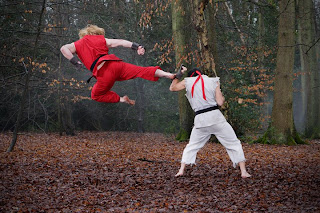 Whenever Hollywood adapts something from another medium, the conventional wisdom is that certain things must be changed. Literal translations will only appeal to core fans, and megabudget blockbusters are geared toward pulling in mass audiences. The outlandish costumes and character designs found in comic books, video games and the like simply will not work when rendered in live action. Ditto for certain story and character elements. As long as the spirit of the property is maintained, everything else can be reconfigured into something that won't alienate the ordinary layman.

Much to fanboys chagrin, this line of thinking isn't wholly illogical and is sometimes right on the money. Bryan Singers decision to put the X-Men in black leather costumes is understandable when one considers the bright color palette of the original comics. Superhero Comics in particular have always carried the stigma of being serialized entertainment for kids. That such a stigma is wholly unfair doesn't change the fact that a seemingly hokey and/or kitschy product risks death in the marketplace.

On the flip side, tinkering with the source material sometimes shows blatant disregard and ignorance as to what made it appealing in the first place. Bryan Singer clearly was not interested in the apocalyptic confrontations that are inherent to superhero comics and this was evidenced by the bland, stifled fight scenes in the first two X-men movies. His respect for the dramatic elements of the story was not tempered by an understanding of the basic appeal of superhero comics.

The whining of fans can sometimes get monotonous, especially when you consider the reality that most fans have no knowledge of film-making. However, the proliferation of "Fan films" and trailers over the past decade or so points to a knew phenomenon. Certain fans are becoming quite literate in the language of film and have decided to use those tools to pay tribute to their beloved properties. The joy of these offerings is that the makers often aren't concerned with appealing to non fans or being too literal. They don't have to worry about making a return on an investment of hundreds of millions. They pool their resources and talents together and take the plunge, sometimes emerging with something quite special. 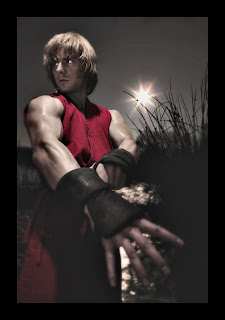 Streetlight Films has succeeded where the Hollywood has twice failed, and with a mere fraction of their resources. Filmmakers Joey Ansah and Owen Trevor have channeled their love and appreciation for the Street Fighter video gams into the fearsomely faithful and vibrant "liveaction short film fan project" (per the description provided by The Street Fighter: Legacy official Facebook group) Street Fighter: Legacy. The script was co-written by Joey Ansah and Christian Howard. Christian Howard also aided in story-boarding, fight choreography and stars as Ken. Talk about a quadruple threat!

The three minute and twelve second film depicts a fight between characters Ryu (John Foo) and Ken in the woods. The actors resemblance to the characters is uncanny as is the costume design. A full array of powers and special moves are on display. Prime Focus provides crisply polished visual effects that crackle to life with electricity and vibrancy. The fight choreography goes beyond mere competence and would be adequate for a full length feature.

Also notable is how the production captures the look and feel of both Japanese Anime and live action productions. The Japanese dialogue and subtitled translations will have you thinking that you are either seeing a well done cut scene from a new Street Fighter game, or watching a fansub of a Live Action Street Fighter movie made by a Japanese studio. Altogether it's an engrossing 3 minutes, and it succeeds in it's ultimate goal: leaving the fans begging for more.

Enough of my endless prattle. Check out the film over at the Street Fighter Legacy youtube channel, as well as a some short "making of" docs. Fans take note. It is possible to show your love for your beloved properties in an productive and artistic way. Your enthusiasms can provide with a window through which to display your talents to the world.