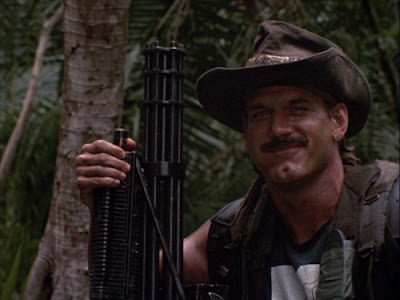 The action films of the 1980's introduced the masses to all sorts of exotic and high tech firearms. These weapons were monstrously big and made unbearable amounts of noise. These dangerous toys delighted the legions of man children who obsessed over their every detail and awed at their destructive powers. With the help of ever advancing sound mixing technology, one could relish the thunderous noises that emerged when triggers were pulled. 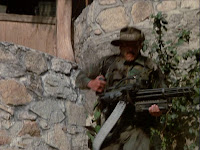 By the time the late 80's rolled around, action films of the day were embroiled in an unofficial contest, equipping characters with bigger and better weapons. So intense did this contest get that existing weapons received implausible modifications. In some cases, weapons had to be designed from scratch. They need not exist in the real world. All that mattered is that they were functional and looked "cool".

In 1987, Predator brought an end to the fantasy weapons race. Future Governor Jess Ventura's character Blaine unleashed Hell on the jungles of Guatemala with his friend "Old Painless". "Old Painless" is a M134 Minigun that had been modified for hand held use. It didn't exist in real life, and was about as impractical a weapon as had ever been conceived. It was huge and ran on electric power, yet Jesse Ventura wields it like an M-16. 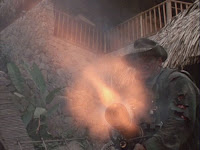 Despite the obvious logistical gripes, it was amazing to see "old Painless" in action. As the whirring engine roars to life, it's growl is covered by the drum roll crackle of rapid gunfire. The muzzle flash resembles a mushroom cloud made out of flames. It's scene stealing moment occurs when Mac (Bill Duke) lays waste to an entire patch of forest while Blind firing at the Predator. His buddies arrive and join in. By the time the team of commandos stop firing, you'd think a lightening bolt had just touched down.

"Old Painless" might have brought pain to whoever was unlucky enough to be in it's line of fire, but it also brought joy to millions of Action fans the world over and continues to do so. 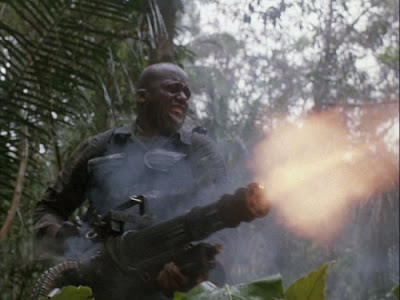