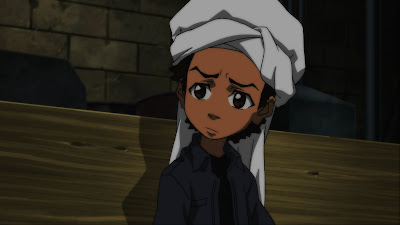 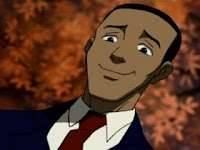 This episode gleefully goes way over the top, portraying Tom's fear as an honest to goodness phobia.  Despite his fear, Tom is very tolerant of homosexuality.  He is a gay rights advocate and has no problem with viewing depictions of consensual gay sex in movies and television.  This might suggest that Toms overtly "homo-friendly" nature might a be a form of over compensation.  The term "pause" is again played for laughs, as is the ineffectiveness of scaring kids straight.  The inmates are shown to be not only inarticulate, but incapable of organizing themselves or seeing beyond there own base instincts and desires.


The "booty warrior" of the title is a send up of a real life convict that was interviewed on an episode of the MSNBC documentary series Locked Up.  In the now infamous clip, an inmate named Fleece Johnson explains the mentality behind homosexuality and rape in prison.  In the process he makes "booty" sound like the most sought after commodity imaginable.  The fact that the clip ends up unintentionally humorous undermines its intended impact.  Chris Hansen from "To Catch a Predator" is this episode's first clear target, and opens the show on the perfect note.

When I first saw the promo for this episode, I mistakenly assumed it would be a giant send up of the classic "special" episode of Fat Albert & The Cosby Kids entitled "Busted".  In that episode, Fat Albert and the gang are given a Scared Straight style tour of a maximum security prison after they are arrested for joyriding.  "A Date With The Booty Warrior" doesn't seem to have any references to it at all.  Instead, it mines the prison rape theme for every possible joke, cheap or otherwise.  Most of it is obvious and hilarious.  Up until the actual riot, the hilarity is consistent and non stop.  There is also a bit of commentary on the prison industrial complex by way of Huey that works on a variety of levels and shows just how insightful the show can be in spite of its hamfisted approach.

"A Date With The Booty Warrior" continues the winning streak of this seasons latter half.  It's every bit as outrageous as "Pause", and offers satisfying closure to the plight of Tom Dubois.  Tom is not only The Boondocks resident assimilated negro, but he is also the living embodiment of anxiety.  Fear rules his life.  That in and of itself is perhaps an insight into the Black male psyche that Aaron Mcgruder never intended.  Just as the violent macho posturing found in America's prisons is mostly a facade, Tom's entire persona is a coping mechanism.  The only difference is that he chooses avoidance and passivity over brutality and intimidation.  Both Tom and the inmates have a way of protecting their manhood.  The Boondocks finds a way to make both quite funny.