The Boondocks Takes a Walk Down The Dark Side 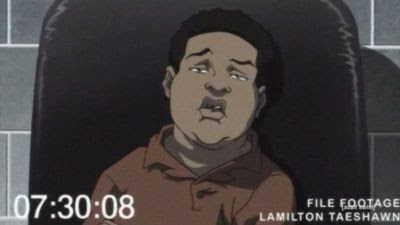 The latest episode of The Boondocks is yet another curious entry into the show’s cannon. Entitled "Smokin With Cigarrettes", it has Riley befriending a bad seed by the name of Lamilton Taeshawn. Lamilton’s extracurricular activities include grand theft auto, destruction of public property and assault. His overly sympathetic grandmother makes allowances for his behavior due to his troubled childhood. As his antics escalate into animal cruelty, the show takes on the mood of a horror anthology series. In a nod to Halloween, Lamilton is being pursued by an obsessive character named Dr. Doomis. 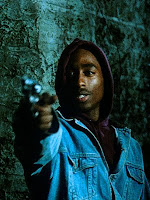 Once Riley sees how truly disturbed Lamilton is, he is repulsed and their friendship goes into meltdown. The resulting scenes are a dead on parody of Key moments from Juice, including the locker side meeting between Quincy (Omar Epps) and Bishop (Tupac) as well as the rooftop fisticuffs that conclude that film. These are the only moments in the episode that even approach being funny, as the rest of the goings on are so creepy.

Also interesting are some of the underlying messages. During a visit to the Freeman household, Lamilton’s grandmother unravels a tale of woe meant to explain her sons delinquency. Grandpa Freeman nods his head out of politeness, but dismisses the story as hogwash as soon as the grandmother is out of earshot. This could be seen as contrasting Black America's Skepticism regarding child psychology with the contradiction of how black America regards its own dysfunctional children as victims who need to be protected from a racist and archaic justice system.

News reporters lament how the boy needs help, yet the show gives every indication that he is truly evil. Dr Doomis suggests that the boy should be destroyed like a rabid dog, yet Huey is shown openly questioning the idea that the boy should be killed for a crime he "might" commit. Mcgruder seems to be playing both sides of the fence, admonishing the liberal tendency to see violent criminals as victims, but also attacking the notion of self righteous types who are eager to dole out biblical justice. The show refuses to take a side, instead providing any number of discussion and talking points. It's hard to see whether this is the result of a lack of commitment on the part of the writers or an attempt to truly provoke thought.

Again, none of this is as funny as it is morbidly fascinating. I watched in slight disbelief, wondering how far it was willing to go in that direction. The killing of the dog suggested there were no limits to how dark things would get. One thing is for sure: successful or not, Black television has never had anything quite like The Boondocks.