Cool Characters: Why Jules Winnfield Is The Baddest Shepherd To Ever Walk The Earth 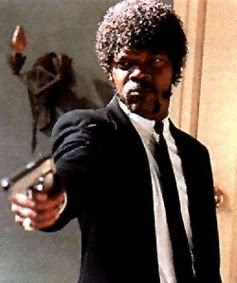 Its been almost 16 years since I first saw Pulp Fiction, and I often wonder just what became of Jules Winnfield.  Most of us know him simply as the cold blooded, Bible quoting hit man that stole the show in Quentin Tarantino's masterpiece.  We hardly ever question just what it is about him that continues to captivate us.  Sam Jackson's usual histrionics certainly play a huge part in our continuing fascination with Jules, as oes Tarantino's brilliant screenplay.  However, this is a case of the sum being much greater than the whole.  Jules is a work of cinematic magic.  Jackson took what Tarantino had written and infused it with his own wild energy.  The result is a character who exists autonomously from his creators.  At some point during Pulp Fiction, Jules became real in a way that few film characters ever do.


Before Pulp Fiction, Samuel L. Jackson had small character roles in a number of notable films.  He was a foul mouthed robber in Coming To America and a computer programmer in Jurassic Park.  Perhaps his most recognizable role before Jules was the crack addicted Gator from Jungle Fever.  We had seen him dozens of times but we did not know his name.  He was simply "that guy" who happened to appear in all of our favorite films.

Jules was obviously inspired, at least in part, by the flamboyant anti-heroes of Black Exploitation (as well as guy from Quentin's childhood by the name of "Big D").  I've always considered him a rather outspoken version of Priest from Superfly.  While Priests quiet and calculating nature would make him seem to be the more interesting and mysterious of the two, there really isn't much to the character other than his desire to not be controlled by "The Man".  The seemingly loud and boorish Jules doesn't care to play the strong silent type.  He is comfortable in his own skin and confident enough in his intelligence to let you know exactly what's on his mind at any given time.  He also has no illusions about who he is or what he does for a living.  Like Sosa said about Tony Montana in Scarface, there is no lying in him. 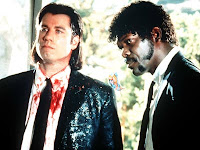 Jules consummately professional and outwardly thoughtful nature stands in stark contrast to the drug fueled aloofness of Vincent Vega (John Travolta).  Vega could witness the most amazing occurrence and never stop to process what he just saw.  Likewise, his carelessness brings about increasingly dangerous situations that eventually culminate in his death at the hands of Butch (Bruce Willis).  He is bailed out of trouble more than once, only to shrug it off as no big deal.  Jules, as profane and violent as he is, seems to adhere to some sort of discipline.  Although he never verbalizes it, it's there.  It manifests itself in the epiphany Jules experiences when a volley of shots fired at close range fail to hit him and Vincent although they were both directly in the line of fire. 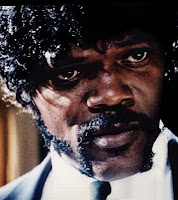 The epiphany that Jules reaches is as much a product of deductive reasoning as of religious faith.  Too often, African American spirituality is viewed and portrayed in a very superficial manner.  Rarely are religious black folks thought of or portrayed as being "thinking" people.  Part of the brilliance of Sams performance is that you can see his wheels turning.  A metamorphosis is taking place on both a spiritual and intellectual level.

Jules is also the most tangible and earthy character of the piece.  His reaction to Vincent carelessly spraying the contents of Marvins skull all over the interior of their car as they drive is simply priceless.  His anger is understandable and real, pushing a darkly comic moment over the edge into the abyss of sheer hilarity.  His anger increases as the situation reaches a head.  The angrier Jules gets, the more apparent his ability to infuse his profanity laced rants with a sense of poetry.  Has there ever been a more elegant thug in the history of film? 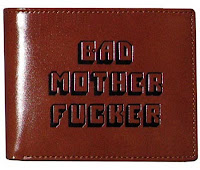 Part of me would like to think that Jules found the enlightenment he sought.  Beneath the streetwise swagger and the violence was a thoughtful and spiritual soul.  It would be nice for that person to shed his destructive ways and live the rest of his days writing poetry and living a life of contemplation.  Then again, my id would love to imagine that Jules is still doling out old testament justice to thrill seeking stick up men and cowardly rip off artists.  That's what Jules dark side represents: The island of grim reality in a sea of phony male posturing.  He is death incarnate, but he sees something that compels him to warn the ignorant and hapless against crossing his path.

As Jules and Vincent holster their pistols and walk off into the sunset, we wonder how the meeting with Marsellus Wallace (Ving Rhames) went.  Did he laugh his ass off as Vincent said he would?  Did Jules shave off his Jheri curl in a symbolic gesture to show that he was shedding his old ways?  Did he eventually start his own ministry, enforcing the word of God with the gun?  Jules Winnfield is one of the most compelling characters of modern film, but perhaps any further adventures are best left to the imagination of the fans.  Jules is perfect as he is:  Violent and conflicted, but not without hope.

"The path of the righteous man is beset on all sides by the iniquities of the selfish and the tyranny of evil men. Blessed is he, who in the name of charity and good will, shepherds the weak through the valley of darkness, for he is truly his brother's keeper and the finder of lost children. And I will strike down upon thee with great vengeance and furious anger those who would attempt to poison and destroy my brothers. And you will know my name is the Lord when I lay my vengeance upon thee."