It May Bleed, But Can We Kill It? The "Predators" International Red Band Trailer! 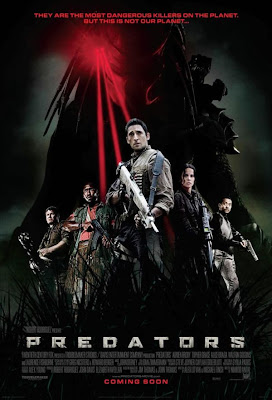 
The original Predator sits right alongside the original Die Hard in the annals of modern action cinema.  Both hold a place of honor as consummate and superb examples of brisk 80's film making.  They are compulsively watchable, and that has been key to their appeal.  They are part of any true action fans collection and get at least a yearly rotation in DVD players worldwide.  That director John Mctiernan could have two such films on his resume speaks to his understanding of the genre.  Neither seemed to be conceived as masterpieces but both ended up becoming just that.

Even more shocking is that, given the reverence for the original Predator, the reboot seems to be generating more excitement among fandom than resentment or apprehension.  Perhaps it's because, as great as the original is, the story is high-concept enough to sustain a re-imagining.  Perhaps more than any other genre, action films benefit from advances in film-making and weapons technology.  We are now in an era where directors and screenwriters can conjure up whatever they wish.  This has been both a blessing and a curse, but as long as restraint is shown it needn't be a concern.

What stands out most in the new international red band trailer for Predators is the ferocity of it all.  It seems fully committed to the Most Dangerous Game motif, with the testosterone overdosed protagonists all sporting thousand yard stares that are meant to cover up fear.  A First Blood style spiked booby trap can be seen at one moment.  The main characters are not performing black ops in central America like Arnold and his crew.  Instead they have been rounded up on a strange planet that serves as a giant game preserve.  The only sense of unity among them stems from the mortal danger they all face.  They are totally stranded and isolated.  Truth be told, their predicament is scarier than the one dramatized in the original.

This may not end up being as influential or beloved as the original, but it most certainly looks to be a high octane offering on it's own terms.  My anticipation for this is officially in high gear, even if it is directed by the same guy who made Armored.  Predator can never be replaced, but perhaps I can now make room on my shelf for a worthy companion piece (The highly underrated Predator 2 notwithstanding).  Expect the critics to be as divided on this one as they were on the original (Roger Ebert liked it, Gene Siskel didn't).