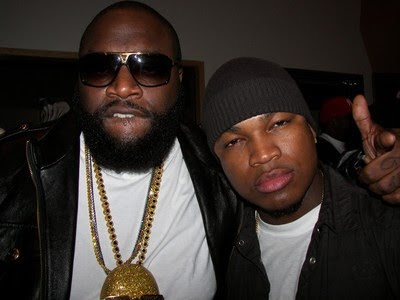 As if the swaying "red carpet at the players ball" vibe of the track itself weren't enough, Rick Ross saw fit to equip his intoxicating new song "Super High" (featuring Ne-Yo) with a clip directed by the legendary F. Gary Gray.  The video features a cameo by the perpetually young Stacey Dash, who makes goo goo eyes at "The Bawse" while riding shotgun in her man's yellow Lamborghini convertible.  Rick is leading a caravan of motorcyclists down a stretch of highway through the desert.  They help him force the jealous boyfriend to a halt so Stacey can hop out and hitch a ride with The South Florida Don.

To be honest, I don't think that the video fits the vibe emanated by the song itself.  I actually pictured Rick and his crew cruising down south beach, or even 125th in Harlem while flossing the cleanest whips imaginable.  The "Sons of Anarchy" motif isn't horrible, but I imagined something much more elegant and flossy.  Still, the song is undeniable with drums sounds that are reminiscent of Barry White's "Never Gonna Give You Up" and violins that will have the listener soaring over the clouds.  Score one more for the "Bawse".