The World Is Riley's 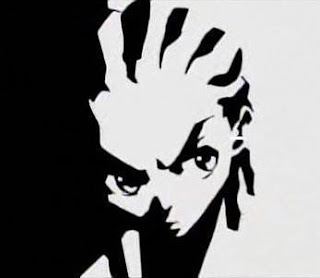 This season of The Boondocks has been a roller coaster ride in terms of tone and quality.  It's been all over the place, inspiring any number of reactions from both fans and detractors.  At this point, it's impossible to anticipate what the remaining episodes have in store for us.  Perhaps it's time to just sit back, take it all in and reserve our judgments until after the credits roll on the series finale. 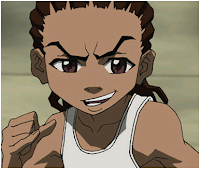 Last night's episode, "Fundraiser", is perhaps the most delightful one yet.  After binging on contemporary gangster films, Riley decides to stage a Tony Montana style come up in the candy business.  He applies what he learns from the movies, determined not to make the same mistakes that befell their main characters.  As expected, he shirks Huey's advice against such action.  Riley's come up is strategic and decisive.  He puts together a team and moves on the competition.  His business becomes so lucrative that it draws the ire of school administrators and people much higher up the food chain.  As the plot thickens, the hard headed Riley adheres to the lessons he learned from the likes of Tony Montana and Henry Hill even after he realizes that real life logic doesn't function the same as movie logic.

"Fundraiser" goes a long way in proving the theory that The Boondocks functions best when it abandons heavy handed social commentary aimed at "important/black" issues and just has fun.  In fact, the less profound it tries to be, the more profound it ends up being.  "Fundraiser" is all about America's gangster fetish, or more importantly how so many people use contemporary crime films as a blueprint for real life hustling.  As the situation escalates and becomes violent, Riley refuses to do the "smart thing" and continues to follow in the footsteps of his fictional gangster heroes. 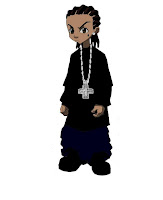 Parallels are also drawn between school fundraisers and the crack game.  The kids sell thousands of dollars worth of snacks for "prizes" that in no way compensate them for the time and effort expended.  The adults at the top of the operation only care about getting their cut.  Almost everyone can be bought off, including the parents who should be questioning the origins of their children's new found wealth.  "Fundraiser" also tackles the way self serving entrepreuners exploit America's tendency to give money to "worthy causes" without really looking into them.

All of this is done with a myriad of Pop culture references so  plentiful that they go beyond the boundaries of popular gangster films.  When one of Riley's underlings befalls the same fate as a certain space pirate, it results in one of the funniest moments in the history of the show.  Even funnier is Rileys response to the situation.  Unlike other episodes, the shows favorite racial epithet is used sparingly.  Restraint is something that is rarely associated with The Boondocks, but "Fundraiser" shows an ample amount of it.  There isn't much here that can be considered "over the top" or "too far" by the shows standards.

Season three of The Boondocks has not established a  discernible rhythm, so perhaps it's time to stop looking for one.  The Boondocks has always refused to conform to expectations, a quality that would be highly praised in any other television series.  Instead of writing off the entire series on the strength of a single entry, one should stand back and take in the whole picture.  Reactionary responses are the province of lazy minds.  We beg for entertainment that truly challenges us.  When it's offered, we lament the fact that it was not retooled into something more predictable.  Like Riley, we hold on to our ideas of how things should be, rather than looking at them for what they are.  Life rarely conforms to our expectations, and neither does The Boondocks.