"Blackstar Warrior": The Long Lost Tale of The Baddest Mofo in The Galaxy! 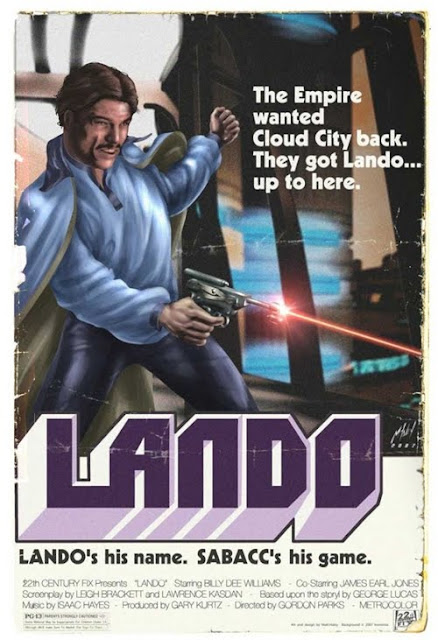 The blaxploitation genre was defunct by the dawn of the summer blockbuster era.  Though its flame had burned out, remnants of it would turn up in Hollywood's next phase.  The capes and perms on display at the players ball soon turned up in a galaxy far, far away.  While Billy Dee Williams' portrayal of Lando Calrissian in the The Empire Strikes Back made him seem like a more suave and mannered yet darker skinned equivalent of Han Solo, a deeper look reveals something a bit more subversive and perhaps not wholly unintended. 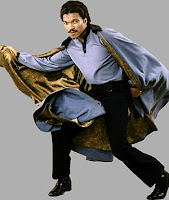 The mayor of Bespins Cloud City sported a fresh perm and a James Brown styled cape.  Though he didn't speak with the broken English of a player or hustler, he was every bit the rogue.  Though he didn't pimp hoes or deal dope, Lando was every bit the descendant of Blaxploitation characters like Superfly's Preist or The Mack's Goldie.  One only has to look at how he spits game at Princess Leia as she lands she exits the Millennium Falcon arm in arm with Han Solo to see how he gets down.  Star Wars appealed to black kids every bit as much as it did white, and Lando gave African American Star Wars fans someone to relate to.

While the pimpish cinematic lineage of Lando was always evident, it has always gone largely unnoticed.  It is has now become the focus of an intriguing and hilarious hoax.  Outsider productions has produced a trilogy of faux mini-docs and a trailer for a Star Wars film that never existed.  According to the fabricated history laid out in  the documentary, black businessman Frederick Jackson Junior had begun filming a Black Exploitation picture set in the Star Wars Universe.


Entitled Blackstar Warrior, The film was never completed.  It featured an African American protagonist  by the name of Lando, the very same Lando that would later appear as a supporting Character in The Empire Strikes Back.  All of this is played completely straight faced, as though it is a matter of historical fact.  The documentaries show the sequence of events that supposedly lead to the creation of the film.  The "Trailer" for Blackstar Warrior is supposedly made up of the only usable footage that remained from the abandoned production.

All of this culminates with the trailer for Blackstar Warrior.  The hilarious clip is reminiscent of the early trailers for Black Dynamite in that silliness of the idea does not undermine its inherent coolness.  Darth Vader is featured as a hand ringing villain in the tradition of "The Man" or just about any other interchangeable evil white man from black exploitation films.  Lando's past as a gambler and ladies man is played up much more prominently than it ever was in the original trilogy.  He also doesn't play second fiddle to Han Solo.  The totally inept Chewbacca costume is laugh out loud hilarious, and the aesthetic fidelity to the original Star Wars is impressive.  While it doesn't achieve the same uncanny level of authenticity as Black Dynamite, it manages to be lots of fun in its own right.

With the amount of Star Wars spoofs and parodies that have been done over the years, it's quite amazing that no one had considered this angle yet.  The original Star Wars, while timeless, is also undeniably a product of the 70's.  The hairstyles, costumes and even some of the philosophical elements mark as being a product of that decade without dating it in bad way.  A Blaxploitation adventure set in that universe makes perfect sense.  Only the most humorless and/or overly reverent Star Wars fans could possibly miss the inherent entertainment value in this idea.

For more info and updates go to Lando Is The Man.
Posted by Unknown at 3:50 PM