"The Color Ruckus" Probs The Origins of One Man's Self Hatred 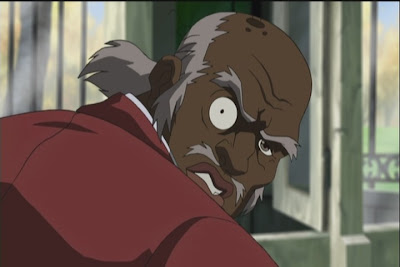 Uncle Ruckus's incessant self hatred has been an endless source of humor for The Boondocks over the years.  Some of it truly insightful and hilarious, some of it repetitive and pointless.  In all three seasons, we have seen it taken to ever more ridiculous lengths via Ruckus' increasingly outrageous commentary and even more outrageous antics.  With "The Story Of Jimmy Rebel" it seemed as though the joke had finally worn thin and Aaron Mcgruder and his creative team resorted to the most obvious brand shock humor.  It seemed as though The Boondocks would end without us getting any real insight as to the engine that drives Ruckus' disdain for his own race.  The best humor usually contains a grain of truth, or something that causes us to look inward and examine our own thoughts and experiences.  It had been a good long while since the exploits of Ruckus had provided either.  He had become a mascot, a side show character.

At long last, Ruckus is given a bit of back-story in "The Color Ruckus".  His abusive and burdensome grandmother has crashed his home, looking for a comfortable place to die.  Ruckus's parents and brothers follow her in anticipation of her demise.  Ruckus's father, Mister (D.C. Curry), is every bit as insensitive and hateful as his mother and openly wishes for her to croak.  He routinely berates his wife and kids, with Ruckus often being the focal point of his blistering verbal abuse.  Flashbacks reveal that his treatment of Ruckus as a child was in fact so horrible that his wife had to invent a fairy tale world for Ruckus to retreat to.  She told him that he was actually abandoned by a white family, and that his dark skin and negroid features are symptoms of an imaginary disease called re-vitiligo, which has the exact opposite effect of vitiligo.  Though she meant to give him some much needed self-esteem, it actually caused to him to disassociate himself from black people completely.  The combination of his father's abuse and his mothers well intentioned lies resulted in the abomination that is Uncle Ruckus.

The Title "The Color Ruckus" is a play on Steven Spielberg's film The Color Purple, itself based on Alice Walker's novel.  Ruckus's father "Mister" is meant to parallel the character of the same name in both the novel and the film.  Ruckus's fabricated origin story is a play on The Curious Case of Benjamin Button.  The Ruckus clan is a parody of a dysfunctional family unit the likes of which the world has never seen.  Even the most offensively stereotypical contemporary chitlin' circuit play has probably never had characters quite like this.  In fact, "The Color Ruckus" plays like one of the many black family dramas/comedies that are centered around family reunions and funerals.  Mister never misses a chance to remind his family of their worthlessness and how they contributed to his broken dreams.  It sheds light on how black men trying to raise families during the days of Jim Crow often took their frustration out on their loved ones.  The episode makes no justification for this, but rather displays it plainly and finds much dark humor in it.  It also examines the old adage of how hateful parents raise hateful children.  Perhaps, Ruckus had no choice but to become the man that he is given the circumstances.

At last, the cycle of Uncle Ruckus is complete.  "The Color Ruckus" is the first time in a long time where the shock humor associated with the character hits its mark every time.  It even manages to muster up pathos for the insufferable old bastard.  Even the most unbearable curmudgeon has a story; to ignore that story is to not acknowledge his existence as a human being.  After enduring shallow episodes that played his corrosive mindset for the crudest and cheapest laughs imaginable, The Boondocks resident self hating negro finally gets fleshed out.  He truly is his father's child.