Micheal Jai White is "The Moor" 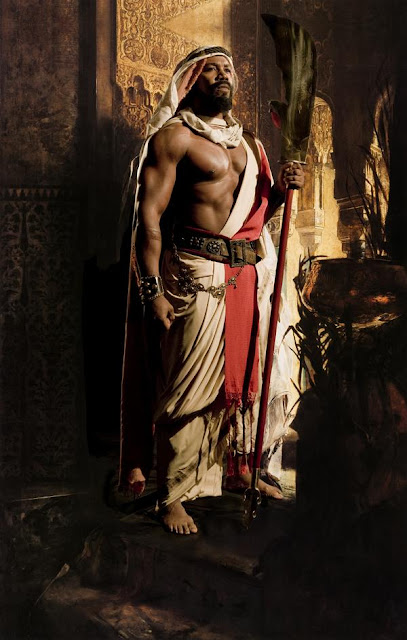 This few minutes of footage for a Micheal Jai White vehicle named simply The Moor is not actually a trailer for an upcoming film, but rather a "concept reel" of sorts meant to give potential investors an idea of the completed film might look like.  Micheal Jai White did something similar for his superb Blaxploitation spoof Black Dynamite and was eventually able to get funding for the project.  The Moor is a different animal altogether in that it takes itself deadly seriously.  It also looks considerably more ambitious.  A prince destined to take his rightful place as king is accompanied by a Moorish protector who is skilled in the ways of the Shaolin monks.  That is all that I am able to gather from the trailer, and I suspect that is all one needs to know from a story standpoint.  Most of the information I have been able to gather about the project comes from a small mention on Bey Logan's Dragon Dynasty blog entry from three years ago, as well as small details I have been able to gather from various message boards.

The footage features Micheal Jai White sporting a turban and a beard styled similarly to Popeye's arch nemesis Bluto (surprisingly this is even more funny when you consider Micheal's observation about Kimbo Slice resembling an evil Black Santa Clause on the Blood and Bone commentary track)  While the budgetary limitations are shamelessly obvious, the fighting and swordplay are impressive.  Jai White's hulking frame moves with unexpected grace and precision.  The other physical performers move with a sense of speed and timing that Hong Kong action cinema fans should be familiar with.  The footage was shot in China, and the presentation recalls the gritty sensibility of the Martial Arts period pieces from the 1970's and 80's.  While the initial glimpses of Micheal Jai White in his Moorish garb will prompt the expected giggles, that slowly dissipates as one witnesses his physical prowess.

In his own way, Micheal Jai White seems to be providing the kinds of films that African American action fans have long fantasized about.  Black militants have long cited the history of Moorish conquests as source of cultural pride for black people.  While the accuracy of such claims can be debated, Micheal Jai White continues to place African American protagonists in the most unlikely of action settings, and does so unapologetically. I hope that audiences do the right thing and forgive the below par production values on display.  The Moor looks to have an abundance of other elements that will readily compensate for whatever shortcomings it might have as a finished film.  In Micheal Jai White's Hollywood, historical epics and action driven period pieces are not the sole province of white stars made to look like foreigners via makeup and lighting.  He should be encouraged to keep pushing for that vision to become a reality.