Musical Memory: DFC & MC Eiht Warn Us About What Happens When "Caps Get Peeled"

There are great deal of people out there who do not let Billboard charts, commercial radio, or video outlets determine what makes their personal playlist.  This was as true in 1994 as it is now.  While the mighty Death Row was familiarizing suburban kids all over America with West Coast gangsta music, there were a subset of underground heroes that did not have the benefit of "the machine".  They may have had a major label contract, but they weren't given the same push as the more marketable artists of the day.  Many exhibited the independent spirit,  toiling below the radar and depending on word of mouth to spread their gospel.  They may not have achieved gold or platinum success, but they appealed to a constituency that cared more for authenticity then marketing muscle.  They knew what their fans wanted and related to.  They sought not accolades and acclaim from the hip-hop press or the taste makers in the big eastern cities, but sales and approval from the audience that matters most: The Streets. 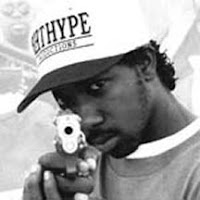 DFC and MC Eiht exemplified such sentiments.  DFC hailed from Flint Michigan and got their start with the late Great MC Breed, (who's debut single "Ain't No Future In Yo Frontin" achieved Gold status in 1991 and turned him into a cult hero).  The letters in their name stood for "Dope Flint Connection" or "Da Flint crew".  The duo was made up of Al and T-Dub. MC Eiht was the lead rapper of the group Compton's Most Wanted.  CMW never quite managed to achieve the same level of commercial success as others of their hometown, but they produced a raw form of Jazzy gangsta music that appealed to purists.  After MC Eiht's supporting turn in the Hughes Brothers crime film Menace II Society, (as well as his effective contribution to the soundtrack, titled "Streiht Up Menace") Eiht began to garner attention as a solo artist.  Such Bulletproof respect reached all the way to the 5 boroughs of NYC, where Eiht had a sizable following.  The west was emanating a sound and attitude that the whole country could feel, especially those who lived in Midwestern cities where street gangs from both LA and Chicago had been infiltrating throughout the 80's and 90's.  It makes sense then, that DFC and Eiht would have a mutual appreciation for each others style.  That appreciation would culminate in a track that would make little noise in the mainstream, but that had obvious appeal for anyone familiar with the kind of music made by both artists. 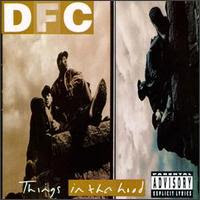 The lead single off DFC's second album Things in tha hood was not directed at the radio, but at those who make nightly runs to the liquor store in customized whips.  This was the spring of 1994, the height of the G-Funk era.  MC Eiht and DJ slip were increasingly leaving behind the break beats of their earlier albums.  The Jazzy yet funky bottom heavy synthesizer aesthetic used on "Streiht Up Menace" worked like gangbusters (no pun intended), and CMW planned to explore and refine it to it's very limit.  They provided the musical backing for "Caps Get Peeled": A contemporary R&B/Jazz track with thick bass and coasting strings that create a sinister yet relaxing vibe.  Oddly, it suits the violent subject matter.  The laid back mood adds a sense of normalcy to it all, as opposed to slapping you in the face with all to obvious shock value.  In the enviornment that DFC and Eiht come from, violence is routine.

The video gives us the standard images associated with the era.  It begins with a disclaimer that  espouses the by then tired mantra of gangsta music "reflecting reality".  This was when video outlets such as MTV began to wilt under pressure from political and parental watch dog groups to edit violent content from music videos.  Up until this point, one could actually spot semi and fully automatic firearms in rap videos.  By 1994, such things were routinely blurred out (along with close ups of 40's being guzzled and blunts being toked).  The video for Caps get Peeled was fairly uneventful, featuring classic cars giving their augmented up hydraulic systems a workout.  DFC and Eiht are shown cruising through the hood on a liquor run while seeing other young black males being searched and frisked by the police.  Hard to believe there was actually a time when artists didn't profess to be hard while blatantly filling their videos with the most extravagant imagery imaginable.  Though the gangsta rappers of the mid-90's were still phony in their own right, they often made music that emanated the mood, feel and tastes of the streets.  Nothing exemplifies that better than this west coast and Midwest collaboration, showing that game truly recognizes game.