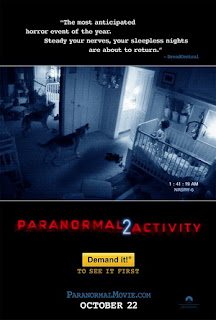 When a film appears to have become a phenomenon based on a gimmick or a novelty, conventional wisdom leads many to dismiss its success.  What skeptics are often unwilling to admit is that such cynicism is often a bit disingenuous and grounded in "hipper-than-though" attitudes.  When a supposed gimmick works too well, or better than was anticipated, a knee jerk response can be to try and diminish it.  The inevitable sequel is seen as something of a litmus test as to whether or not the first go around was merely a fluke.  Again, skepticism is usually a thinly veiled hope to see the property fail.  A gimmick that works more than once may have to be reevaluated.  What appears to be a parlor trick may indeed be skill, craft and ingenuity at work.  Fool me once, shame on you.  Fool me twice...

As Daniel(Brian Boland) and Kristi(Sprague Grayden) celebrate the arrival of their newborn baby boy Hunter, the joyous occasion soon gives way to tension and paranoia.  After their home is vandalized by a rather bizarre burglary in which nothing was stolen, Daniel has a video surveillance system installed.  As the strange occurrences increase and become more frequent,  Kristi suspects that something else is going and that it may be linked to a childhood trauma.  She confides in her sister Katie(Katie Featherston), who  provides little in the way of sympathy or comfort.  As it becomes more and more obvious that an uninvited and unseen intruder has taken up residence, Daniel remains skeptical.  The camera system becomes a silent and omnipresent observer, recording the drama as it unfolds. 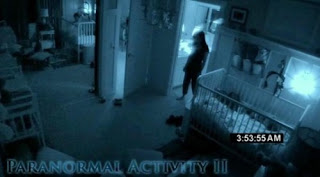 Paranormal Activity 2 is the sequel to last years very successful Paranormal Activity.  The film was shot on home video in a single location and presented in a documentary style to give the impression that it was evidence of events that had actually occurred.  There was no violence or gore and special effects were practically non-existent.  The film relied on the most primitive techniques for generating tension. While many found the film's approach to be eerily effective, they also lamented the rather repetitive dramatic elements and story structure.  This caused the film to be disregarded as triumph of marketing and gimmickry in some quarters.  Surely, the release of a sequel so soon after the success of the first film provides an ample opportunity for this fraud to be exposed.  Surprisingly, Paranormal Activity exposes the inherent weaknesses of this idea while still being just as effective.  Maybe even more so.


Paranormal Activity 2 digs into the exact same bag of tricks as the original, while employing some slight enhancements.  Title cards and counters in the corner of the screen mark the passage of time.  Instead of a camera remaining stationary in the master bedroom and filming the protagonists as they sleep, we are treated to multiple angles via the surveillance system.  They are cycled through as though edited together by a security guard charged with watching over the property.  The multiple angles keeps the technique from becoming quite as mundane as it was in the first film, though the filmmakers again stretch it the breaking point.  A home video camera is again employed, used at alternate moments by Daniel and his daughter Ali.

As in the first film, the soundtrack is used to optimal effect.  Each scare is preceded by a low fidelity hum, sometimes punctuated by sudden bumps and crashes.  The surveillance footage is shot by hidden cameras that remain in fixed positions and glower down on each location, allowing audiences to drink in the full picture.  They never pan in any direction in order to follow the action.  The combination of these techniques feed the imagination well beyond capacity, allowing the viewer to do much of the work.  This creates an interesting dynamic where the viewer is almost competing with the film, as if watching a magician perform the simplest trick.  The concept of a "jump scare" seems unfair, so audience members peruse every inch of every shot like a forensics expert.  If they can find anything that "telegraphs" the inevitable jolt of a sudden noise or something lurking in the background, it robs the sequence of its power.  Admirably, even when the viewers efforts bare fruit, the jump scares still work.

Then there are the moments that are creepy in their mere conception.  One of them centers around baby Hunter and is easily among the most breathless and anxious moments in recent memory.  It speaks to the fears of every new parent.  There are also some delightfully simple devices like doors that are slightly ajar, and characters going to deepest darkest corners to explore bumps in the night.

This kind of tension ratcheting does have its drawbacks.  As effective as the end results are, the moments leading up to them are undeniably tedious.  The incessant teasing of the aforementioned title card and counter routine, no matter how ingeniously staged, becomes grating.  At some point you just want the film to get on with it already, especially when what its doing is so obvious.  Also, the pseudo-documentary presentation coupled with the "naturalistic" style of acting and the single location makes everything play a bit more repetitive than it would if presented in a more conventional way.  This is where the film's most valuable asset, that it appears to be an actual event unfolding before ones eyes, works against it.  Home videos can be the very definition of tedium.  It also makes it clear that the filmmakers are stretching the threadbare material well beyond the breaking point, making one wonder if it justifies a feature length running time. 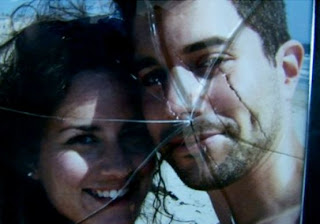 Thankfully, Daniel isn't quite as annoyingly macho and inconsiderate as Micah(the protagonist from the first film), which makes him a bit more sympathetic.  He is every bit as stubborn, but his stubbornness seems to be born both out of healthy skepticism and a need to protect his family.  Ironically, that protective instinct is what initially leaves them open to attack.  Kristi is much more of a housewife than Katie (the other protagonist from the first movie), which makes her seem a bit more helpless when the foolishness starts.  Speaking of Micah and Katie,   they both make an appearance here, played by the same actors.  Katie and Kristi are sisters.  This ties the two films together in a way that should play as much more contrived than it actually does. It is yet another form of slight of hand on the part of the filmmakers.


Paranormal Activity 2, like its predecessor, is a very slight film that proves both resourceful and effective.  While I am unsure if either film constitutes as technically good film making or even good storytelling, the results are undeniable.  No matter how much you anticipate a jump scare, it still makes you jump.  You will be aggravated by the tedium and repetition, only to be startled by the simplest parlor trick imaginable.  The film is perhaps designed for single viewings as it is a bit less than substantial, but it manages to do two things that it's gorier and more lavish counterparts often cannot: it legitimately scares you, and manages to linger in your mind after the credits roll.