Style5 Animation Takes Us On a Tour of 'The Wrong Block' 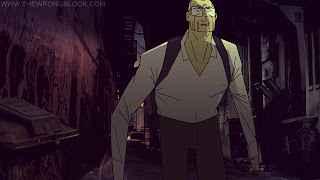 As hard as it is to believe, there are many people who still see animation as a medium for children.  Even with the proliferation of Japanese anime over the last 25 years, such attitudes persist.  Skeptics see graphic violence and explicit sex as nothing more than placebos that help man children cope with their childish viewing habits.  While such obvious elements do not necessarily constitute entertainment for "mature audiences" on their own, it is rather short sited and ignorant to maintain the stance that cartoons can only be for kids.

Toronto based studio Style5 animation has something quite interesting in the works: an animated film noir called The Wrong Block.  It centers around retired detective Max Braddock, who awakens out of an eleven year long drunken stupor to solve one last case involving the son of his slain partner.  As the official trailer shows, the hard boiled plot is supported by some very offbeat visuals.  Character designs incorporate elongated necks and broad, parallelogram shaped torsos.  This thing definitely isn't shooting for realism, which is one of the many joys of animation.  The reality of the world being depicted can be dictated by the artists pen.


Quirky projects like this go a long way in showing the potential for animation.  Animation is not  a genre in itself but a medium that can be made to accommodate any genre.  Luckily here in the west we have innovators like Sam Chou and his team over at Style5 who ignore silly stigmas and push  boundaries to their limits.  There's no telling whether or not The Wrong Block will be a successful experiment, but the effort is certainly worth it.

*You can find out more at the official site.