Damian Kenow Leads Us Down The 'Paths Of Hate' 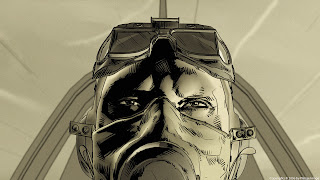 Animation has the ability to make the terrestrial seem otherworldly.  The mundane can become an odyssey through the unknown when rendered by an artist's pen as opposed to being filmed in live action. Likewise, a fantastic historical event that has lost some of its wonder over the years can feel new and fresh when viewed through the prism of CGI or traditional cell animation.

Whether it's WWII fighter planes above Europe or X-Wings in the furthest reaches of space, cinema has seen its share of aerial dogfights.  Though thrilling, they have become quite familiar.  Well, Polish animation studio Platige looks to make the familiar fantastic again with Damian Kenow's animated short film Paths Of Hate.  It revolves around an aerial dogfight for which very little context is given.  Its makers tout it as an examination of that most primal emotion that drives humanity headlong into the chaos of war: hatred. 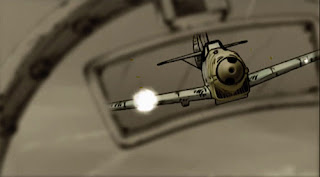 The animation itself has the quality of a highly detailed motion comic, or an example of the rotoscoping process at its highest state of refinement.  It could even be a cell shaded cut scene from a flight simulation video game.  While all of the aforementioned comparisons might seem like belittlement, they are not. What this trailer does is offer an interestingly stylized take on an old standard.  We see two pilots doggedly pursuing each other over water and mountainous terrain.  The close ups of bullets being fed into guns and spent shell casings being discarded speak to the vast amount of energy and resources being expended by these two men for the sole purpose of killing one another.  They most assuredly do not know each other, and likely have no quarrel beyond the different nations and ideologies they represent.

The trailer ends rather abruptly, but leaves the viewer wondering how this clip fits into the context of the entire piece.  Bottom line is it leaves the viewer wanting more.  It's also a good example of how images by themselves can convey ideas, be it close-ups of the eyes or of machinery.  Amazingly, the medium of animation continues to expand to accommodate not only various themes and subject matter, but various styles and methods through which to make the real surreal and vice versa.  As the line separating the animated world from the real world becomes increasingly blurred, Who Framed Roger Rabbit? suddenly feels a lot less like a fantasy.  Then again, maybe that's just me.