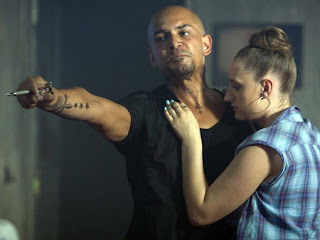 As expected, life grows ever more complicated for everyone’s favorite super-powered screw-ups.  After a run-in with the elusive “Superhoodie”, Alisha is intrigued in way that demands her curiosity be satisfied.  Curtis also searches for answers, but of a different sort.  After locating the women that appeared in his drug addled vision, he begins to visit her home regularly.  Nathan and Simon accompany Kelly to the shop of a tattoo artist with rather unconventional methods.  During the visit, something strange happens that inspires Nathan to explore an underdeveloped side of his character (much to Simon's chagrin).  Meanwhile, Alisha's quest to solve the mystery of Superhoodie uncovers much more than she is ready to deal with.
As Misfits slowly morphs into a full on superhero story, it continues to explore a number of challenging themes.  Given the shocking bit of information we receive regarding the mousy and introverted Simon, his character arc seems to be a variation on the sort of nerd wish fulfillment represented by more popular super heroes such as Spider-Man.  Alisha’s superpower (or ailment, depending on how you look at it) plays like a long, hard lesson on valuing the looks and irresistible sexuality she has been blessed with.  The first season showed us just how flagrant and manipulative she was with those gifts, using them as a get out of jail free card.  The incessantly juvenile and grating Nathan learns that whatever barriers are keeping him from consummating his relationship with Kelly may have more to do with latent desires in his own heart than mere personality differences.
More than anything else, the main theme that seems run through the duration of this season is following ones desires and having the courage to shoulder the consequences that come with that.  We all want the answers to leading a happy and content life, to know what “purpose we serve.”  However, we are reluctant to seek these things out when given the chance, clinging to the facade of normalcy like a security blanket.  Even if we find said answers, they just lead to more questions as opposed to stability.  The facades and masks we have developed offer a comfort that the “truths” we seek cannot.  Becoming what you are meant to become, or coming into your own, requires the willingness to grow and mature.  No one among The Misfits has displayed that ability as of yet.  Thus, they are not ready to accept the mantle of heroes, if indeed that is what they are to become.
Misfits is such an odd but satisfying series.  It’s chock full of juvenile elements as demonstrated by its crass sense of humor and sexuality.  Its also deceptively insightful and dense, able to contain a considerable amount of plot machinations and character development into a single episode.  While it caters to our base instincts, it also engages our psyche.  We all share the same flaws and desires as these five, yet the show encourages us to see them as deeply troubled.  It also invites us to laugh and gasp at their mishaps.  Then, it throws us a series of sucker punches that cause us to realize that they are none too different from ourselves.   As the show inches closer toward traditional superhero territory (as evidenced by certain developments in episode three) I can only hope that it maintains the ability to shock and surprise the audience.  I have a feeling that when all is said and done, Misfits may end up as a contender for the best super hero television series ever.
Posted by Unknown at 6:38 AM