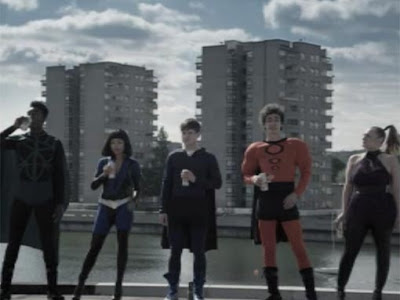 By Scott Tre
In Episode 5, things get wilder for the ASBO Five.  After walking in on a charity worker named Jessica during a private moment, Nathan has one of his infinite lives taken away.  While he and Alisha  investigate who exactly is responsible, Simon and Jessica begin a courtship and find that they have much in common.  Kelly helps and befriends a scruffy yet seemingly gentle outlaw named Bruno.  Bruno has also been affected by the mysterious storm that birthed the ASBO Five, but in a much more bizarre way.  Curtis and Nikki begin to compulsively consummate their relationship.  That night, at a costume party being held at the community center, everything comes to a proverbial head in some decidedly unexpected ways.
The main theme of Episode 5, from what I can tell, seems to be sex.  The Misfits has always had a strong sexual component (much of it by way of Alisha’s undeniably magnetic aura and Nathan’s juvenility), but the sexcapades on this episode are more explicit and frequent than any episode yet.  This is interesting when contrasted with the American take on superheroes, which hardly allows for any sexuality save for standard romance subplots.
American superheroes are often celibate, some even asexual.  Batman and Spider-man, as they are portrayed in the movies, never ever get to close the deal onscreen.  They chase after the women of their dreams and never get the ultimate prize.  As many emotional/psychological issues as those characters have, it would be nice to see them let of a bit of sexual tension.
Alas, American audiences are too prudish for such things.  Thankfully, Misfits is a British production.  Its creators understand that sexuality has to be a integral element in a series that has such attractive core characters.  Any heterosexual male who says they aren’t hoping for a peek at what Alisha, Kelly, and Jessica are working with is either lying or delusional.
A more intimate side of sexuality is also explored.  Kelly learns in a very unexpected way that Homosapiens aren’t the only ones that crave love and affection.  Nor are they the only ones that struggle to suppress their more primal instincts.  Just as the ASBO Five themselves struggle to hide their superhuman abilities to the world at large, normal people harbor all sorts of weird secrets and desires that they dare not share or indulge.  We all struggle with our true natures, no matter where we may fit in on the evolutionary food chain.
Jealousy, in more than one form, is also explored.  As she patiently waits for Simon to blossom into the armored parkour expert of her dreams, Alisha must contend with the fact that she will not be the one to “deflower” him.  The considerable bedroom skills he displayed in episode 3 will come by way of other lucky girls.  Then there is the blind, raging jealousy of a father who guards his daughter's virtue like a crazed sentry.  His love for his child borders on incestuous. 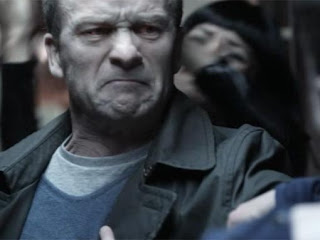 From a plot standpoint this episode is all over the place, but in a good and entertaining way.  Things that would sound silly and preposterous on the page play out in a way that makes them seem not only compelling but plausible (relatively speaking).   Slowly but surely, we get to see the ASBO Five take a more active role in their own destinies, and steeling themselves to the disappointments and dilemmas they are confronted with.  By the last half of the first season, Alisha’s predicament made her seem damaged and fragile.  At this point she seems a bit tougher and more capable of protecting herself, as does Simon.
My fear that Misfits might take a turn toward something more routine and expected has subsided a bit with this episode.  I don’t know where things are going or what to expect from this series.  There seems to be little that it isn’t willing to do with these characters.  It ventures effortlessly into tragic and knowingly absurd territory, all the while displaying a deft self assuredness about itself.  The show is confident that it is going about its business the right way, and as a result so is the audience.  What will the ASBO Five be when they reach journey’s end?  Will they have costumes?  Only the writers of Misfits know for sure.
Posted by Unknown at 4:16 PM