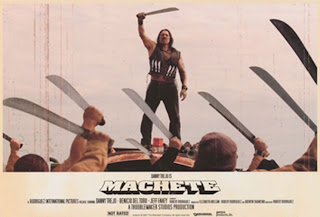 My love for Sin City notwithstanding, I've always found the idea of Robert Rodriguez more satisfying than the reality of Robert Rodriguez. The novelty of his "do-it-yourself" approach to film making wore off for me quite a while ago. Even his most enjoyable films never resonate long enough to leave a lasting impression. His enthusiasm is evident, but it far surpasses his ability as an artist. His half of Grindhouse suggests that he may have missed his calling and should instead be cranking out straight to DVD fodder.

That being said, the new trailer for Machete that made it's debut over at Aint It Cool News is hard to deny. It continues Rodriguez's obsession with exploitation cinema. The cracks and crevices of Danny Trejo's chiseled visage were always meant to be displayed in this manner. The scene of him leading a caravan of Low Riders down the street is pure gold. The presence of Jessica Alba and Michelle Rodriguez sends the eye candy meter instantly into the red. The kitsch factor is enhanced by the inclusion of Don Johnson. The inclusion of Robert De Niro is a bit surprising even when one considers his recent output. Still it should be fun to see him affect an caricaturish southern drawl.

Weather or not Machete should have remained a trailer has yet to be seen. It's one thing to sustain such a tone for a few minutes, but dragging it out to feature length presents a whole new challenge. The best jokes are often short and sweet. Only a true master knows how to tell an elaborate story and then reveal a punchline without losing the audience along the way. Let's hope that Robert Rodriguez and Ethan Maniquis are up to the task.

Posted by Unknown at 7:52 PM No comments: Links to this post

Enter the 43rd Chamber of Midtown 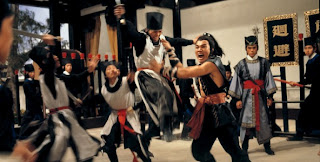 We all have a starting point for our enthusiasms. A "ground zero" if you will. The place where we discover some small part of what makes us tick. It could be something as trivial as discovering your favorite meal at your favorite restaurant, or something as monumental as losing your virginity. It is exhilarating to get those small glimpses into the real you that snowball over time and provide you with a lifetime of pleasure.

Read more »
Posted by Unknown at 3:26 AM 7 comments: Links to this post