Evolution of a Dream Demon 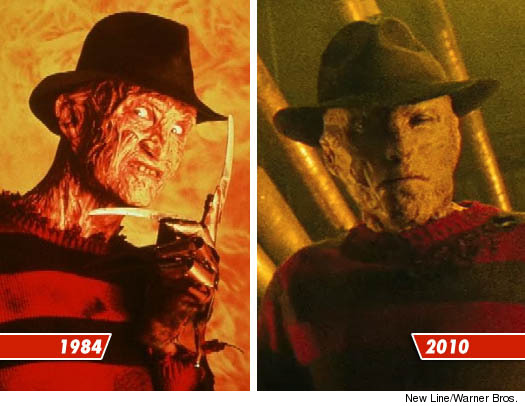 
Despite the success of Platinum Dunes A Nightmare on Elm Street remake at last weekends Box Office, a sequel is not exactly a sure thing. Both critical and fan reception have been ice cold, with everything from the acting to the pacing to the new Freddy makeup drawing harsh criticism. There also seems to be issues with the logic regarding some of the kills, which apparently make it all too obvious that the deaths aren't merely sleep related accidents.

Its all too easy to forget that the original was fairly unremarkable slasher fare save for the basic concept and Freddy himself. Wes Craven came up with one hell of an idea and produced a marketable entertainment that was more shallow than fans would want to admit. For the most part the 26 year old film has not dated very well. More to the point, the film is held in a wholly different esteem by it's core fanbase than it is by the larger film community.

While both films are less than perfect, it would seem that the perceived flaws of the original can be forgiven. The main problem is that the remake is more concerned with atmosphere than moving things along. The original, for all it's shortcomings, kept things going at a steady clip. It provided exactly what teen audiences of the 80's wanted out of a slasher film. That it had no pretensions about what is was is both refreshing and a bit frustrating. The ideas the movie plays with beg for a more ambitious film to be made out of them.

When the remake was announced, the casting of Jackie Earle Haley provided hope that something a bit more sophisticated than the original was underway. Could it be possible that we'd get a Freddy Movie with good acting and writing? One that doesn't just keep you awake as a young child, but really digs into your subconscious and refuses to let go? The prospect of such a film sends chills up the spine. Imagine if Freddy was Truly scary in a way that stopped being amusing and became truly disturbing.

The fact that Platinum Dunes was handling this project kept those expectations in check. Platinum Dunes is very much about slick product that provides adequate entertainment value. The problem is that such cinematic cotton candy dissolves as soon as you digest it, providing nothing in the way nourishment. Still, it's nice to dream (no pun intended).

That promise was ultimately not delivered on. The new A Nightmare on Elm Street is standard Platinum Dunes product. Actually, it's a bit more lethargic and formless than their usual output, a fact that is evidenced by the meandering first act. The sound and set design do an admirable job of constructing a sturdy haunted house for Freddy to Play in. The remake is superior in that regard, though it's a minor victory considering that the original is 26 years old. 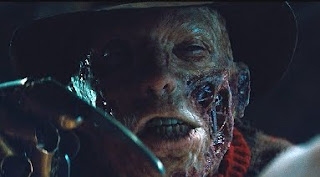 Then there is Freddy himself. In all honesty, this new incarnation of Krueger is in many ways superior to the prototype. More pedophile than mere child murderer, his intentions toward his victims are of the most unimaginably vile sort. The film goes full bore in this regard, allowing Haley to display a sexuality that was never before suggested or exhibited by the character. It will be a bit much for some, as American Audiences are fickle when it comes to displaying cruelty toward children. Child murder is tolerable as long as it occurs onscreen, and sexual abuse of any sort is shied away from. Unless of course, it is depicted in a "serious" drama. 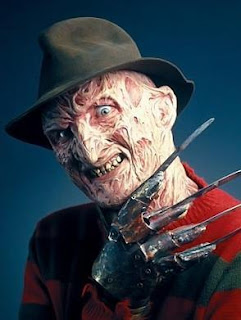 That is perhaps what is most effective about Jackie Earle Hailey's Krueger. He truly feels evil. The suggestion of what he wants to do to his victims is more unsettling than any of his onscreen actions, to the point where his antics often seem anti climactic. This is the polar opposite of Robert Englund's ringmaster of bad dreams approach. Englund's Krueger was much more satisfying from a superficial standpoint. He relished in torturing his victims and being the star of his on show. With each sequel, his self awareness undermined his ability to truly get under our skin. We liked him, but beyond the first film we stopped being really scared of him.

So here we are, expressing our disappointment over a remake that is neither a sufficient improvement over the original nor as bad as we let on. The 2010 A Nightmare on Elm Street has it's strengths, but is ultimately done in by the same lack of ambition that the original suffered. It deserves consideration as an intriguing (though not wholly successful) take on the material and possibly the most serious rendition ever of Freddy himself. There is no reason to keep Krueger as the clown Prince of slasher cinema forever. He is one of the most ingenious cinematic villains ever. The perfect embodiment of subconscious childhood fears. The "bogeyman" and the "dirty old man" rolled into one. If only he get a movie that was truly worthy of him.
Posted by Unknown at 12:23 AM 25 comments: