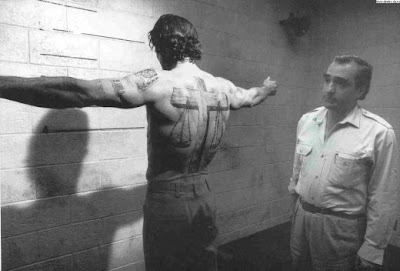 Pain is one of many barriers between mankind and immortality. We associate death with pain, a sensation that we avoid at all costs. To control our fear of pain and our reaction to it brings us one step closer to cheating death and achieving immortality. This desire to cheat death can be seen in our fascination with superheroes. Superheroes possess a number of abilities beyond our own, chief among them are usually some level of super strength or invincibility. They often cannot be hurt by the same things that hurt us, and even if they are, they are able to compartmentalize the pain and recover faster. Remove the Kryptonite from Superman's presence and he recovers in mere seconds. If only human beings were so resilient. 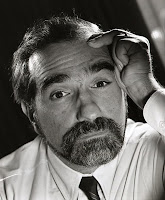 Awesome displays of superhuman ability can be seen in any number of modern blockbusters adapted from superhero comics. Surprisingly, they can also be found in some of the better known and regarded films of Martin Scorcese. While Superhero Blockbusters and Scorcese films would seem to be on wildly opposite ends of the cinematic spectrum, a closer look reveals that Scorcese is just as enamored by the idea of superhuman abilities as the rest of us. In his fiercely visceral and ultra personal cinematic world, this vision is not realized with CGI and pyrotechnics. Instead, shocking violence is used and pathology pathology is explored. In the world according to Scorcese, those who possess superhuman abilities are not mild mannered nerds or billionaires. They are often the shabbiest and craziest among us, and they rarely use their abilities for the greater good.

It is important to note that the characters in Scorcese movies do not come by these gifts as part of the traditional "origin story", and the powers themselves are not the focus. Rather, the powers in question are the means by which these characters achieve a certain goal. They also reveal the inner workings of their tortured Psyche. Three of Scorcese's "immortals" stand out among this rogues gallery, each the product of a different decade. All were brought to life with the help of method actor extraordinaire Robert De Niro. In 1976 their was the introverted and reclusive Travis Bickle of Taxi Driver. At the dawn of the 1980's, we got the insanely jealous Jake La Motta of Raging Bull. In 1991, we were introduced to the brutal and murderous Max Cady. All are frightening in decidedly different ways and all reveal the darker underbelly of the Male preoccupation with power and image. More specifically, they deal with the fragility that lies just beneath.

First up is Travis Bickle. The most seemingly harmless and inconsequential of the three yet hardly the least dangerous, Travis is a Vietnam veteran who takes a job driving cabs around midtown Manhattan in the mid 1970's. He displays an inability to engage in even the most simple social interaction and courting rituals. The opposite sex remains more elusive and mysterious to him than the most socially inept preteen. In fact, Travis has an overall problem expressing his thoughts and feelings. The clearest picture we get of his thought processes is from the voice over that reveals his journal entries. His thoughts are articulate and sometimes poetic, but reveal a sense of detachment and childish naiveté.

When Travis's attempts to connect to the outside world fail, his id begins to materialize. It manifests itself via travis's disgust with the lurid underbelly of 1970's New York City. He sees the various addicts, dealers, whores, pimps and stick-up artists as roaches that need exterminating. Since he appears to have no friends or family, Travis has nothing but time to ready himself for this task. He eventually sets his sights on liberating preteen prostitute Iris (Jodie Foster) from the hands of a sleazy pimp named sport (Harvey Kietel). Travis readies himself for war. he acquires numerous firearms and commits to a rigorous exercise regimen.

Travis's warrior rituals inevitably lead to him trying to develop an actual super power: pain tolerance. he stands shirtless with his forearm and wrist over an open flame on a stove. He stubbornly holds it there, resisting the urge to pull it away. His frame vibrates and veins writhe beneath the skin of his sinewy forearms like baby snakes. For me it is one of the most iconic and telling images of the film. This exercise comes in handy during Travis's suicidal attempt to rescue Iris. While shooting it out with scumbags in a darkened apartment hallway, Travis is shot once in the neck and again at point blank range in the arm. Both times he is stunned but not incapacitated. he is still able to function and carry out his suicide mission. His bizarre training methods had worked. He has controlled his reaction to pain. As if a darkly humorous comment on his Superhuman status, Travis fails at killing himself after his rescue mission because he has ran out of bullets.

Next up is middleweight champion Jake La Motta, who prides himself on being able to take great amounts of physical punishment in the ring and never be knocked down. In his mind, if you never knock him down, you didn't win. Such bravado can easily be written off as macho foolishness until you see the extent to which the oafish La Motta takes this philosophy. He encourages his brother Joey to strike him in the face numerous times with his bare knuckles. He barely flinches. He agrees to throw a fight and then fails to do so in a convincing manner when he realizes his opponent is incapable of throwing sufficiently devastating blows. His pride will not let him feign a loss to an inferior opponent. Jake seems to value his pain tolerance to the detriment of just about every other aspect of boxing. He is more masochistic brawler than a sportsman or pugilist. The question is, why? 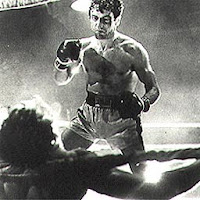 Jake is insanely jealous, especially when it comes to his wife Vickie (Cathy Moriarty). He perpetually suspects her of cheating and/or harboring a desire to cheat. His violently jealous rages know no bounds and recognize no bonds, familial or otherwise. Jake is a staunch believer in Chris Rock's adage that "no one is above an ass whipping". Even after attaining a championship belt, Jakes insecurities are not muted. In fact they are amplified. Jake's tolerance for pain doesn't translate to his personal relationships. His ego and manhood are fragile and cannot withstand much punishment. Jake inflicts emotional and physical pain on his loved ones, and not within the context of a sporting contest.

last but certainly not least we have Max Cady. More cartoonish and larger than life than either Bickle or lamotta, Cady offers us a much more literal and flamboyant portrayal of a superhuman. Max is a sociopath and exceedingly brutal rapist who spent 14 years in a penal facility for a rape he committed. This could have been avoided had his lawyer Sam Bowden (Nick Nolte) not buried a report that confirmed the promiscuity of Max's victim. Upon his release from jail, Max emerges as someone, or something, quite different than the illiterate hillbilly that was sent to prison all those years ago. He zeroes in on Sam and his family, intent on exacting the most thorough and ghastly revenge possible. He seeks a moral victory as well. Bowden shirked his responsibilities his client and to the law. That he did so while suffering a crisis of conscience is of no consequence to Max, just as it would be of no consequence to the state bar should Sam's actions come to light. In Cady's mind, his propensity for rape and murder is no more reprehensible than Sam's refusal to carry out his lawyers duties. That Sam is free and allowed to think of himself as being morally upright reads to Cady as hypocrisy of the worst sort.


While preparing for his vengeance, Max fortifies his mind and body. While in jail He learns to read, and more importantly he is able to comprehend what he reads. As his personal library grows more complex, so does his ability to philosophize and pontificate. He adopts an exercise regimen that shreds his body into a sinewy collection of striations and cross striations. He adorns his musculature with a variety of jailhouse tats that reveal his religious fanaticism (perhaps a remnant of his pentecostal upbringing). As if that weren't enough, he possesses a tolerance for pain that is otherworldly. It's source is unknown. In one scene, Cady ruminates on it's origin as he clutches a lit road flare. As the burning hot wax pours out over his fist, he does not flinch. We see no sign that the pain actually registers. This is a far cry from Travis Bickle, who trembled as he attempted to stand stoically with his arm extended over an open flame. Cady is Bickle's superhuman ambition realized, albeit in a caricaturishly countrified form.

Max Cady is able to withstand a severe beating by multiple armed attackers and even turns the tide on them. He brushes off a pan full of boiling water being thrown on him as if it were a mere annoyance. The only thing able to elicit anything remotely resembling a human reaction to pain is when he is set ablaze after being doused in lighter fluid. Unlike Taxi Driver or Raging Bull, Cape Fear sort of disregards any attempt at realism after a certain point. As the third act approaches, Max Cady quite literally appears Godlike. Nothing seems able to stop him, much less kill him.

Max Cady represented a point on no return in Martin Scorcese's infatuation with superhuman levels of pain tolerance. Cape Fear takes that idea to a metaphorical and stylistic extreme. It was Martin's first truly commercial film and his highest grossing up until that point. Critics considered it over the top and inferior to the 1962 original, but that hardly seemed to matter to audiences, he had become accustomed to (and developed quite a taste for) violent thrillers. The fruitful teaming of Scorcese and De Niro had finally found a way to appeal to the masses.

The evolution of Martin Scorcese's infatuation with, and envisioning of, superhuman ability adds another layer to an already fascinating filmography. Pain, both emotional and physical, is no stranger to the characters in Scorsese films. None of them ever really escape it, though they find extraordinary ways to deal with it. In that, they are just as superhuman as Spider-man, Superman or the X-men. Villainous though they sometimes may be, they possess an ability that we all crave. Though they endure hells both literal and personal, we never see them flinch. Such a skill would be invaluable in the real world.

Thank God for the movies, and thank God for Scorcese.
Posted by Unknown at 7:12 AM No comments: