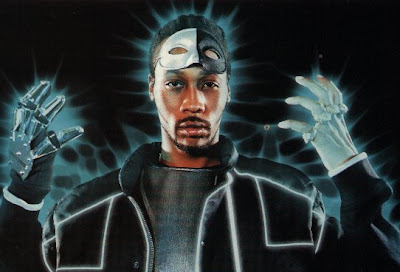 The elusive Bobby Digital movie will finally see the light of day.  Titled Bobby Did It, the film will be showing at this years Staten Island Film Festival, where The RZA is serving as celebrity chairman.  The film was directed by RZA and Ralph Mcdaniels of Video Music Box fame.  In a story that bears more than a passing resemblance to The Warriors, Bobby Digital (RZA) is accused of murder and must fight to clear his name.


Hopefully Bobby Did It will get a proper release on DVD following its premiere at the SIFF.  It would be a shame if RZA decided to return it to his private vault without giving the rest of the world a chance to enjoy his cinematic vision.  Seeing as how it was completed years ago, it's safe to say that RZA has probably grown as a filmmaker since then.  It should be interesting to compare it's cinematic merits to that of Wu-tang Vs. The Golden Phoenix, and then compare the both of them to The Man With The Iron Fist.

Posted by Unknown at 8:57 PM No comments:

Email ThisBlogThis!Share to TwitterShare to FacebookShare to Pinterest
Labels: Rza 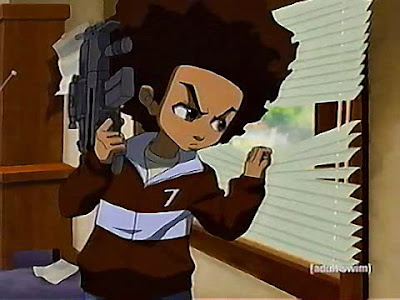 The First season of Aaron Mcgruder's The Boondocks was a revelation.  While it drew fire for it's incessant use of the word "nigga" as well as it's shameless parading of black caricatures and stereotypes, it touched on quite a few key points of the class war that rages within the black community.  Purists decried the shows reliance on shock and slapstick as well as it's stylistic deviation from the comic strip on which it is based, but the novelty factor of the show made for fresh and exciting television.

Now in it's third season, the novelty factor is quickly wearing thin as Mcgruder and company seem intent on pushing the envelope beyond the bursting point.  The dialogue is peppered with so many racial epithets and curse words as to be incoherent.  The topics are a bit less than timely (The Ice-T/Soljah Boy beef is nearly two years old and rap songs that offer detailed instructions on how to cook crack are nothing new)and the laughs are fewer and further between.  This season seems desperately intent on upping the anty, and not in a substantial way.

That's not to say that it hasn't had its moments.  It's all too easy for any curmudgeonly Hip-Hop elitist to agree with the more obvious points raised in "Bitches To Rags" and "It's a Black President, Huey Freeman" (The title being a not so subtle reference to The Peanuts holiday specials).  However the methods used to make those points are so over the top that even the faithful have to start questioning their intent.  Uncle Ruckus' self hatred has been a given since the series premiere and has provided some decent belly laughs, but instead of giving us more insight into the character we get overkill.  For all of the shock tactics employed, did anyone find "The Story of Jimmy Rebel" to be truly funny?  Better yet, was its point of such profundity as to warrant President Obama being called a "Nigger"?

More and More, the social commentary element of the show seems to be at the service of shock humor.  Perhaps unconsciously, this has revealed another odd aspect of the show:  The episodes that don't focus so much on heavy handed commentary tend to be the most entertaining ones.  "The Red Ball" and "Stinkemeaner 3: The Hatocracy" are easily the most enjoyable entries so far this season.  They work because they derive their entertainment value from pop culture references and solid fight choreography.  They 86 any pretenses at smart satire and are content to simply be fun.

"Stinkmeaner 3:  The Hateocracy" is peppered with references to Raiders of the Lost Ark, Master of the Flying Guillotine and Black Belt Jones.  It also features some hilarious cameos from 3 iconic black sitcom characters.  The episode doesn't feel as forced or as overdone as "It's a Black President, Huey Freeman" or "Bitches To Rags".  Perhaps it points to a much healthier route the show could have taken in it's final season.  Instead, we get to watch Aaron Mcgruder and his associates embark on an animated "shock and awe" campaign that seems devoid of any purpose or inspiration.

One wishes that third season of The Boondocks could have been something more than a gift wrapped Christmas present to its detractors.  The show had so much potential.  Finally Black America had it's equivalent of the more "edgy" and "smart" cartoon series that have emerged in the past two decades.  The shows current meltdown is more than a bit disconcerting, and disappointing to those of us who defended it's tactics in the past.  Maybe it's makers should stop trying so hard and let a bit irreverence creep in.  At the end of the day, a cartoon should be entertaining.
Posted by Unknown at 6:31 PM 2 comments: 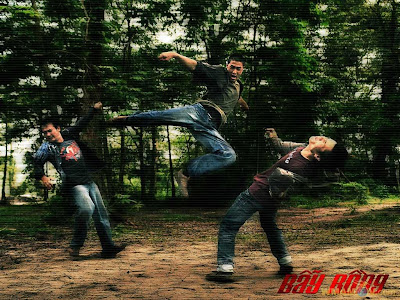 Once upon a time, Hong Kong was the Mecca of action packed B-movies.  High octane amusements were cranked out with assembly line regularity.  Those days are long gone and the Hong Kong film industry is now a shadow of it's former prolific self.  In the last decade, other countries have attempted to fill that void with their own scrappy product.  These films show the influence of Hong Kong action cinema and find ways to take action choreography to new heights.  Each year seems to bring a handful of films that are the action movie equivalent of extreme sports.

Bay Rong or Clash (as it will soon be known in North America) is the latest of this new wave, coming to us from the country of Vietnam.  The plot revolves around a mercenary named Linh whose services have been retained by organized crime in exchange for the release of her kidnapped daughter.  To this end she enlists the help of other mercenaries, and becomes romantically involved with one named Quan.  This is one of the many complications that takes place amidst flying fists, feet, and bullets.

Clash premiered at this years Tribeca film festival.  It is reportedly very similar to American Action blockbusters in every regard save for the fight choreography, though that much can be gleaned from the trailer itself.  Hong Kong action classics were also known to bare a passing resemblance to their much more expensive Western counter parts aside from the expected cultural differences.  Anyway, at least we will be treated to some top notch fight scenes. 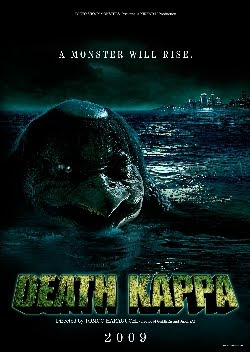