Wondrous Weapons: Travis Bickle Has Something Up His Sleeve 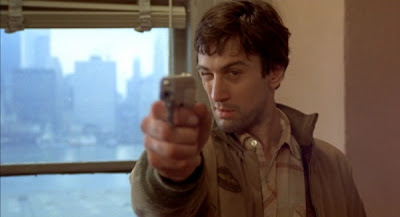 Idle hands are the devil's workshop.  Too much free time can be a very bad thing, especially if your a psychopath with an over active imagination and combat experience.  When you want to do a big job you have to bring out the big guns, but you should always keep a trusty back up piece in reserve.  As any survivalist knows, there's no such thing as being too prepared.

Disgusted by the lawlessness and hedonism of 1970's New York City, taxi driver Travis Bickle (Robert De Niro) decides to launch a one man clean up campaign.  He acquires all of the necessary tools of the trade, amassing a small arsenal of handguns.  The most interesting aspect of this is the elaborate modification he makes to one the smaller weapons.

Travis takes a Smith & Wesson Escort and attaches it to a drawer slide, making sure the slide itself is properly greased.  He then straps the slide to his right forearm.  The slide contraption is more than just a fancy holster, spitting the weapon into Travis's hand whenever he flicks his wrist.  The apparatus is conveniently hidden under the sleeve of Travis's Jacket.

The scariest part is that the intended target would never see it coming.  A hand extended in friendship may actually be hiding a poisonous snake just itching to take a bite.  Aside from this crude version in Taxi Driver, fancier ones can be seen in both Red Heat and The Adventures of Ford Fairlane.
Posted by Unknown at 10:36 AM 6 comments: