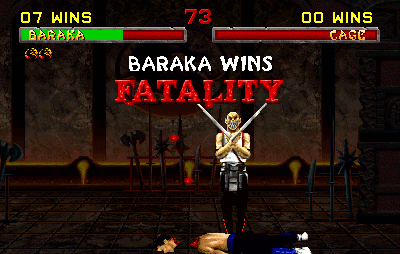 Video Game movies have gotten the short end of the stick in terms of Hollywood Adaptations.  When Mortal Kombat and Resident Evil are considered the cream of the crop, there is obviously room for improvement.  Not long ago, the Street Fighter: Legacy Short provided in a scant few minutes all the entertainment value that was lacking in the two feature length films.  Now we have a similar offering from director Kevin Tancharoen.  The beneficiary this time is the Mortal Kombat franchise.

Mortal Kombat: Rebirth offers the by now cliche "dark and gritty" take on the property, grounding the story in a film noir style hyper reality that would be well suited for an episode of Batman: The Animated Series.  While this may seem like blatant fanboy pandering,  it also raises an interesting question.  The Mortal Kombat franchise is a shamelessly contrived mythology mired in the most outlandish fantasy setting imaginable.  Human martial artists do battle with cyborgs and monsters in a grand tournament.  Is it possible to translate that to a "real world" setting while retaining the spirit of the games?  In a worst case scenario, it can render something that was already silly even sillier.

The casting of Micheal Jai White as Jax lends the proceedings a much need air of legitimacy.  If that doesn't sell you, the fight choreography most certainly will.  The tone is miles away from the flamboyance of the Paul W.S. Anderson iteration.  We are also introduced to essential characters such as Reptile, Baraka (Lateef Crowder) and Johnny Cage.  Shang Tsung shows up in photo, very much resembling the villainous Han from Enter The Dragon.   I very much prefer this take on the material to the much too fondly remembered feature film.  At the very least, a film done in the style of this short will not seem as horribly dated in fifteen years as the 1995 film does now.

Early buzz for the short had people speculating that it was a trailer for an upcoming video game or possibly an upcoming movie.  As it turns out, the footage is actually a concept reel, giving investors an idea of the potential for this new take on the material.  Should the film secure financing and distribution, the casting could be totally different.  Even if this doesn't result in a full length feature, this footage opens up a Pandora's box of possibilities.  It should provide fuel for the imaginations of Mortal Kombat fans for quite some time, and probably inspire more than a few fan films.