"The Boondocks" Reacquaints Robert Freeman With His Long Lost Son 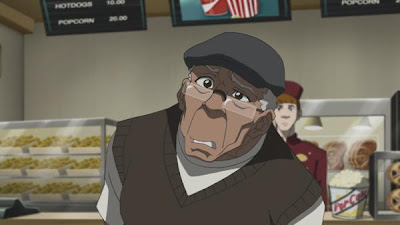 On "The Story Of Lando Freeman", Robert Freeman's world is turned upside down when he makes the acquaintance of a young man claiming to be his long lost son.  The young man initially poses as a drifter trying to get some landscaping work in the neighborhood.  Once he gets into Grandpa Freeman's good graces, he drops the proverbial bombshell.  At first, Robert dismisses him as merely a con man.  However, Lando persists and Robert's conscience begins to get the better of him.  The two eventually wind up on The Steve Wilkos Show, awaiting the results of a DNA test. 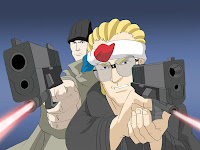 "The Story of Lando Freeman" is a more subdued episode than we've been treated to as of late.  It reveals a certain sentimentality amidst all of the lurid shock humor.  Parental responsibility and the importance of family are examined.  The young drifters intentions are pure.  He wants only to be close to the man he believes fathered him.  The world of day time talk shows is also lampooned, showing how the audiences for such shows wholeheartedly accept the drama on display as "real" without ever bothering to read the fine print in the closing credits.

There are a couple of legitimate laughs interspersed through out.   Since the subject matter isn't as  outrageous as "Pause" or "A Date With The Booty Warrior", the opportunities for broad slapstick and sight gags are fewer and further between.  With the "The Story of Lando Freeman", the latter half of "The Boondocks" third season takes a break from it's usual grind and opts for a smaller story.  While this may be to the chagrin of viewers who enjoy the more obvious elements of the show, it is ultimately necessary.  No amount of profanity, racial epithets or raunchy humor will matter if the audience is not invested in these characters to some degree.  "The Story of Lando Freeman" manages to actually make us care, which is to the series credit.