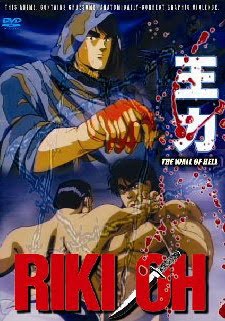 It may be much easier to destroy than to create, but destruction itself can be undeniable fun.  This is especially true when destruction comes in the form of musclebound monosyllabic types who are skilled in the fighting arts.  Eastern culture has always had its own unique take on the "post modern gunslinger" (as Ben Ramsey would call it) archetype.  Instead of using guns, they use fists and imaginary martial arts techniques that result in severed and exploding limbs.  An early example of this can be seen in Japanese Chanbara films, which themselves provided inspiration for Spaghetti Westerns.


When I first discovered the joys of Hong Kong action cinema, I happened upon a film called Riki-Oh: The Story of Riki after reading about it in Sex & Zen : A Bullet in the Head, which had become my unofficial guide to this weird but wonderful new world.  It sounded like just the sort of pop culture oddity that would tickle my fancy.  The story centers on Riki Ho (the live action movie name), a young martial arts master who goes to prison after avenging the death of his girlfriend at the hands of heroin dealers (it was was a young boy in the OVA).  Upon arriving in the jail, Riki upsets the balance of power by unleashing his deadly martial skill on various bullying inmates.  In order to protect the secret opium growing business from being discovered, the assistant warden dispatches a group of super powered trustees known as the "gang of four" to dispose of Riki.  A blood bath ensues.

Even if you've never seen The Story of Riki, you may unwittingly viewed a clip from it The Daily Show's Five questions segment.  It was obviously chosen for that distinction due to the unintended hilarity of its outrageous imagery: 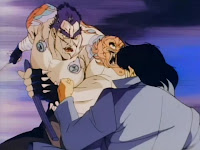 The Story of Riki was based on the manga, and is considered something of a "comic book" film in certain quarters.  its graphic violence earned it the dreaded "category III" rating in its native country.  In fact, the reported levels of violence had me a little apprehensive at first.  As any film buff knows, there is a big difference between violence in mainstream films and the brand of carnage b-level exploitation pictures.  A true exploitation picture has an equal chance at being either unintentionally funny or truly disturbing.  What I ended up seeing, while undoubtedly mean spirited, was far from disturbing.  Its style was "comic book" in the most overt sense of the term, with the violence reaching improbable and nonsensical heights.  Obviously phony gore effects are shamelessly put on display.  At some point only sheer morbid fascination kept me engaged.  The movie was simply unbelievable in both conception and execution.

Yet, my morbid curiosity still remained and demanded to be satiated.  Luckily, around the same time I discovered The 43rd Chamber I also discovered a store called Games & James.  For me, it became the anime equivalent of "The Chamber".  It specialized in video games and fan subbed anime, some of which was done by the store itself.  One could purchase VHS tapes with episodes of Dragonball Z recorded directly off of Japanese television, sometimes containing Japanese commercials.   I looked among their collection of tapes and saw a cover with a beautifully rendered manga drawing and the title "Riki-Oh" emblazoned on the front.  I asked the clerk if that was the anime version of The Story of Riki and he nodded in he affirmative.  I immediately snapped it up, paid my ten bucks and shoved it into my book bag.

Titled "Wall of Hell", the OVA is much easier to take seriously.    The carnage is rendered much more convincingly in animated form.  Alas, this hardly consolation for a story that serves as an excuse for graphic violence.  The fights have relatively little in the way of suspense as Riki often dispatches his enemies with the greatest of ease.  The animation quality is typical of early 90's anime in that the frame rate is noticeably low, but the animators compensate for that with an emphasis on style.  upon watching it for the first time in almost 12 years, I was struck by how mundane it all seemed.  Maybe I'm becoming a curmudgeon in my old age, but the whole thing played like a poor man's version of Fist of the North Star.

While revisiting the pleasures youth can offer comfort, in many instances it just serves as a reminder of how just how much your tastes have evolved.  Unconsciously, we come to demand more from our entertainment.  Even "guilty pleasures" have to have something more than gimmickry and novelty to keep us engaged.  While certain elements of Riki's story still fascinate me, I'd rather not commit to the full journey.

Posted by Unknown at 4:14 AM No comments: