Robert Freeman Turns To "Mr. Medicinal" To Cure His Woes 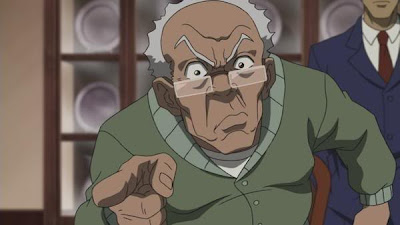 The perception of Marijuana as both dangerous and addictive is played for laughs The Boondocks episode entitled "Mr. Medicinal".  After enduring a long overdue physical, Robert Freeman is told that he must reduce his stress levels immediately.  When a regimen of prescription pills fails to do the trick, Thugnificent offers grandpa an "herbal" alternative in the form of Cannabis Sativa.  This brings about a noticeable change in Robert's normally grumpy demeanor, turning him into an uncharacteristically pleasant fellow.  As his marijuana use gradually becomes more habitual than medicinal, the law attempts to separate him from his beloved Mary Jane.

"Mr. Medical" primarily lampoons hyperbolic anti-drug propaganda and the general misinformation concerning marijuana use.  It also slyly references the general feeling of distrust that many African Americans feel toward traditional medicine and the pharmaceutical industry.  Mr. Medicinal also points out the hypocrisy of how Americans categorize stimulants.  Alcohol abuse is not only casually tolerated but encouraged to a degree, while others shun prescription medicine but won't hesitate to take a long pull off a joint.  The pop culture references are kept to a bare minimum, with an obvious reference to A Fish Called Wanda.


While the soundtrack for The Boondocks has never been lacking in terms of good production, this music in this episode really stands out.  The beat that plays during Robert's physical instantly gets the head nodding.  As far as laughs are concerned, there is a parody of Matthew McConaughey's 1999 arrest that should have many viewers in stitches.  Overall, the episode is not as consistently funny or shocking as "Pause" and not as touching as "Lovely Ebony Brown" or "The Story of Lando Freeman".  It is mostly an amusing misadventure in the life of Robert Freeman..