It may be hard to picture now, but there was a time when filmmakers were limited in terms of resources.  In this new age, CGI has made it possible for films with relatively meager budgets to be epic in scope.  If a director has a truly marketable idea (or is lucky enough to assigned to adapt a well known property from another medium), execs will spare no expense to be sure that his vision is fully realized.  While the argument could be made that the lack of financial restraints has resulted in a less disciplined and less resourceful generation of filmmakers, it is still undoubtedly fun to see the mind of a visual stylist let loose upon the big screen.


In Zack Snyder's upcoming Sucker Punch, a young girl named Babydoll (Emily Browning) is placed in a mental institution and scheduled to be lobotomized.  In order to cope with her predicament, she retreats into an elaborate fantasy world of her own design.  Her adventures in this imaginary world help her to deal with and possibly escape the horrible real life fate that awaits her.  Her friends Blondie (Vanessa Hudgens), Sweet Pea(Abbie Cornish), Amber(Jamie Chung), and Rocket(Jena Malone) accompany her on her journey down the rabbit hole.

Aside from the plentiful eye candy on display, The criminally underrated Michael White is also listed among the cast.  The trailer immediately bombards the viewer with a number of flashy visuals that seem derived from realities both real and imagined.  Gigantic, heavily armored samurai warriors are shown.  A massive fire breathing dragon is seen emitting a blanket of flame.  The film has the look of a well rendered video game, but given the premise that may very well be by design.  How these seemingly random images will fit into the narrative are anyone's guess, but their immediate impact is undeniable.  Zack Snyder is shaping up to be one of the premiere visual stylists of his day, and Sucker Punch might just be the film that cements his reputation.

Posted by Unknown at 8:07 PM No comments:

The "Machete" Red Band Trailer Cuts Right Down To The Bone 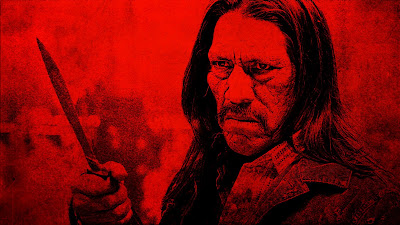 Exploitation films and B-Movies are enjoying a higher profile than ever thanks to the efforts of filmmakers like Robert Rodriguez.  The questionable quality of his films not withstanding, one has to admire his commitment to his vision.  In a way, his films are every bit as personal as the higher brow offerings usually favored by critics.  Rodriguez works on controlled budgets and makes exactly the kinds of films he wants to make.  In that sense he is living the dream.   The relative failure of 2007's Grindhouse might have frightened a less resilient filmmaker, but Robert Rodriguez remains steadfast, opting to crank the volume up full blast and forge ahead.  If he fails, at least he does so by his own hands.

The idea to turn Machete into a full blown feature struck me as gimmicky fanboy pandering when I first heard it.  It would be hard for a feature length film to maintain such a tone throughout it's duration, much less find a worthwhile story to saddle it to.  That kind of novelty works just fine for a couple of minutes, but a full length movie?  Even if Rodriguez was able to fashion a serviceable action movie out of the concept, it would most assuredly only play to the converted.  The converted in this case would be the legions of fans who giggled with glee as the original fake trailer on which the film is based played in front of Grindhouse three years ago.

Fortunately, each subsequent piece of advertising for the film has slowly warmed me to it.  Now, with this red band trailer I am completely sold.  The film clearly does not take itself seriously, featuring the sort of cartoonish carnage that would be right at home in Riki-Oh: The Story of Riki.  Machete (Danny Trejo) is seen repelling out of a window using someones  intestines as a rope.  Limbs are severed, brains are splattered, bare breasts are displayed and lead flies in all directions.  The whole thing comes off like an ultra violent three ringed circus.  We also get some prominent shots of Steven Segal in what looks to be a major set-piece.  There isn't one unappealing moment in the whole thing.  Watch it at your own risk, and be careful not to get any of the burgundy colored stage blood on your clothes.

More Machete Videos
Posted by Unknown at 4:59 PM No comments: 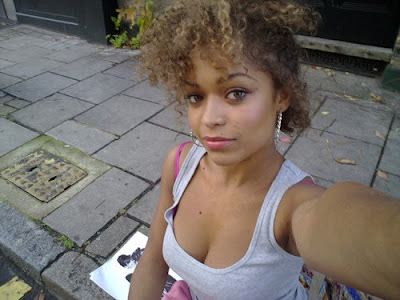 She is completely in tune with and aware of her sexuality.  She uses it like a weapon.  She can see the effect it has on you and is amused by it.  She can break the impenetrability of your gaze and cause your alpha male facade to crumble.  Nothing is more sexy than a woman who is conscious of her abilities and not afraid to play fast and loose with the rules.  It wouldn't be wholly inaccurate to describe her aura as being an honest to god talent.  What she has cannot be learned or taught.  It comes naturally and organically.  If you consider your self a heterosexual male and she doesn't get your blood pumping, you may want to rethink your sexual orientation.  Fittingly cast as the seductive Alisha Bailey in the excellent British superhero television series Misfits, you get to see her powers in all there glory.  Don't fight it, just give in.  Resistance is futile. 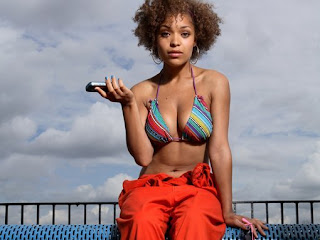 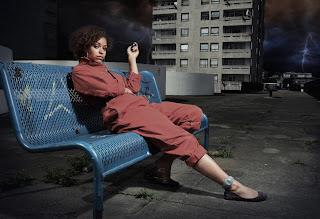 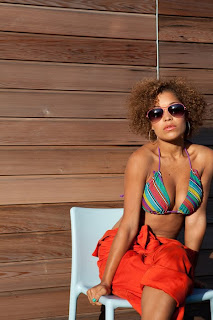 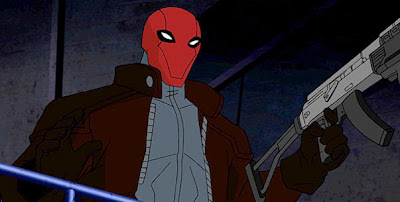 
For well over thirty years, the "dark and brooding" version of the caped crusader has been the order of the day.  Disdain for the campy 1960's television series coupled with praise for Frank Millers seminal Batman: The Dark Knight Returns set the stage for a new image of the Batman to take over popular media.  Fans saw it as more in keeping with Bob Kane's original vision of the character, but this new Batman was in many ways his own beast, more "Dirty Harry" than caped crime-fighter.  The success of Tim Burton's iteration of the character proved more popular than any version of him yet, and Batman: The Animated Series further sealed the deal.  The American public wanted the cape and cowl to remain obscured in the shadows.  Since then, we've gotten increasingly darker visions of Bruce Wayne's alter ego, each one going further into the abyss.  Now Bruce Timm and company offer the darkest animated iteration of the character yet with Batman: Under The Red Hood.


Ever since failing to save Jason Todd (Alex Martella/Vincent Martella) from the murderous clutches of the Joker (John Dimaggio), Batman (Bruce Greenwood) has being living under a perpetual cloud of guilt.  He has little time to mourn, however, as the Gotham City underworld is in the throws of a major coup.  The vigilante known as "The Red Hood" (Jensen Ackles) is making a play to become Gotham's undisputed kingpin of crime.  Fearfully all the other crime lords begin to fall in line with the program save for the fearsome Black Mask, acting crime lord of Gotham.  Reluctant to relinquish his thrown, he turns to the clown prince of crime to slow Red Hood's rise to power.  Meanwhile, the caped crusader, aided by former Robin Nightwing (Neil Patrick Harris) desperately races to figure out the identity of this new Red Hood, who proves to be a more formidable opponent than he has ever faced.  As this masked foursome battle over the soul of Gotham, the future of the city has never seemed in more peril.

Batman: The Animated series was considerably darker in tone than other syndicated cartoon of its day, yet it still remained suitable for younger audiences.  With the current wave of straight to DVD features from Warner Brothers animation, Bruce Timm and his associates are free to explore ever darker avenues with the character.  Batman: Under The Red Hood takes the DC Animated universe into extremely violent waters.  It is fitting that the the story includes elements of the controversial story arc "Death in the Family", where replacement Robin Jason Todd was beaten to death by the Joker at the behest of the readers.  It uses that as a jumping off point for the more recent "Under The Hood" story arc by Judd Winick of Real World 3 fame.


As always, Batman: Under The Red Hood is given a look that is distinct from earlier  DC Animated Universe projects, yet still clearly recognizable as a part of that same universe. The character design of the Joker was clearly inspired by Heath Ledger's portrayal of him in the dark knight, while Batman's character design remains relatively unchanged.  The bat logo is emblazoned directly on his chest and has not been placed in a yellow oval.  The designs of the underworld figures such as black mask owes much to the classic Warners gangster pictures as well as the more gaudy and tacky mobsters of the Scorcese films.  Fedoras and trenchcoats exist side by side with jewelry and fly away collars.  As in Christopher Nolan's recent batman films, the hierarchy of the Gotham underworld is multi-ethnic.

The animation truly shines during the fight and action sequences.  The storyboards for Under the Red Hood could very well serve as a tutorial for Hollywood directors on how to deliver fast paced and rapidly edited action in a coherent manner.  The laws of physics are not strictly adhered to as Batman and Nightwing chase The Red Hood from one ledge to the next, but there is still a sense of gravity and logic to the fight mechanics.  The violence has a feeling of finality and consequence as characters are gunned down in cold blood and brain matter is splattered on brick walls.  The animators even pay attention to the ballistic details, as shell casings parade out of ejection ports and the guns themselves are rendered accurately.

The story line combines elements of crime films and occult horror.  Resurrection from the dead and the dilemmas therein are explored.  The age old question of why Batman simply does not kill the Joker is asked and answered.  Story wise, Batman: Under The Red Hood bares a bit of a resemblance to Christopher Nolan's The Dark Knight in the way it portrays both the Joker and the Gotham underworld, much in the same way that Batman: The Animated Series showed the influence of the Tim Burton films.  While it would be nice if the animated universe of Batman could exist autonomously from his cinematic universe, the cross pollination makes sense.  The milieu is fitting.

It's rare for a DCAU production to not contain at least serviceable voice-over work, and Under The Red Hood is no exception.  Bruce Greenwood sounds strikingly like Kevin Conroy, to the point where his absence isn't a factor.  Neil Patrick Harris is the proverbial wise cracking sidekick as Nightwing.  Harris doesn't bring anything unique to the character but he doesn't detract from the proceedings either.  As The Red Hood, Jensen Ackles exudes youthful reckless, idealism and confusion.  John Dimaggio can't hold a candle to Mark Hamill, but like Bruce Greenwood he does a good enough impersonation to get the job done.

Batman: Under The Red Hood delivers exactly what it's previews have promised.  The action blindsides you with its brutality, and the themes are dark indeed.  This is the Dark Knight as he exists in the minds of fans and often on the comic page.  Though it might not be accurate to call it fun, it is most definitely compelling.  One can't imagine Bruce Timm and company going much darker with the material than they have here, lest they risk making something that is completely unsuitable for kids.  If they did, it's not as though the DCAU could not accommodate such a vision.  As it expands at a prodigious rate, we are provided with slight variations on the caped crusader that perfectly capture every shade of his dark world.