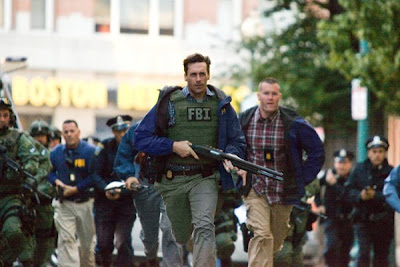 At their best, heist and caper films serve a subconscious need.  Why is it that television programs featuring footage of high speed chases and surveillance videos of brazen crimes continue to be popular?  Those who follow the straight and narrow get a voyeuristic charge out of witnessing the exploits of those who don't.  That such antics rarely meet with success is of little consequence as the spectators aren't the ones on the front line.   The audience gets to cheer on the perpetrator, feeding a secret desire to see him get away with it.  If he fails, the audience can snicker at the ineptitude in which he does so or gasp at the carnage that results.

For his sophomore directorial effort, Ben Affleck has decided to try his hand in the crime genre.  His next film, The Town is based on Chuck Hogan's novel Prince of Thieves.  The story centers on a quartet of bank robbers who operate in the Boston neighborhood of Charlestown, Massachusetts.  The fearsome foursome is headed up by Doug Macray (Ben Affleck) who falls in love with bank manager Claire (Rebecca Hall). Their relationship blossoms at a decidedly inopportune time, as FBI agent Adam Frawley (Jon Hamm) is closing in on  Macray and his team.

All of this sounds very similar to Micheal Mann's Heat, and the trailer seems to be inviting comparisons the Micheal Mann's cops and robbers masterpiece.  If that is the case, Ben Affleck has some truly big shoes to fill, as the famous shoot out from that film has yet to be topped.  Judging by this trailer, Affleck seems to be up to the task.  The brief moments of gun play on display seem to be going for a fairly "realistic" tone.  The overall vibe seems to be that of a gritty urban crime drama more so than a standard caper film or action flick.  Boston is fast developing its own cinematic mythology by way of the modern crime film.  Let's hope that The Town proves to be a worthy addition to that legacy.

Posted by Unknown at 7:38 AM No comments: