Movie Review: "The Expendables" Thankfully Does Not Live Down To Its Title 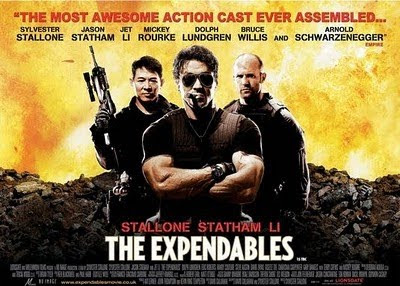 As the age of the heavily muscled super soldier gave way to the era of the scruffy everyman, stars like Stallone and Schwarzenegger saw their popularity wane as the struggled to find footing in the shifting marketplace.  Schwarzenegger saw his box office popularity peak in the early 1990's with summer blockbusters like Total Recall, Terminator 2: Judgment Day and True Lies.  Eraser and Batman and Robin began a decline from which he would never recover.  Stallone, whose popularity peaked in the Mid 1980's with mega successful entries in the already popular Rocky & Rambo franchises.  By the late 1980's his star began to fade.  In the early 1990's he saw a slight resurgence with mildly successful titles like Cliffhanger and Demolition Man.  His career went dormant again until 2006 when the surprisingly good Rocky Balboa reminded audiences of what made that character iconic in the first place.  Similarly the hyper violent Rambo was possibly the best movie from that franchise since First Blood.  Now, Stallone has staged the ultimate tribute to age of the super soldier with The Expendables.

The Expendables plays like an 80's action extravaganza, though not one of the higher end ones.  The presence of Dolph Lundgren is fitting, as The Expendables very much feels like a Rambo knock off that should have been released a year or two after Rambo: First Blood Part II.  It feels small scale, like someone trying to do  large scale story on a medium sized budget.  The trailers made the film look much bigger than it actually is.  It is also less serious and less political  than the Rambo films. While John Rambo clearly is at war with both his past and what he has become, the characters of The Expendables go about the business of killing as though it were the just another job.  This makes some of the small dramatic moments meant to lend the film heart ring hollow, such as the monologue by Mickey Rourke's character about how being a mercenary of war numbs the soul.  By itself the moment is fine, but within the context of the film that surrounds it, it seems at odds with the overall mood.  Similar moments with Jason Statham's character flow a little better and set up a great payoff later on in the film.

Structurally, The Expendables is very uneven.  The film is a bit too aware of what it is supposed to be.  Since it's not a full-on parody, its self awareness seems a bit off.  It's not the tongue in cheek self awareness of the prototypical Stallone/Schwarzenegger actioner from the 1980's, but post "age of irony" self awareness in which the characters seem to know of just how corny and ridiculous it all is, yet still ask to be taken seriously.  This kind of thematic schizophrenia makes it feel as if Stallone had a basic concept for an ensemble action piece but no idea what kind of action film he wanted to do.  The amount of screen time given to Dolph Lundgren is a good example of this.  Lundgren always lacked the charm and, dare I say, acting ability of Stallone or Schwarzenegger or even Van Damme.  Here he plays it mostly straight, but the approach of the film leaves us unsure whether we should be laughing or not.  The only time the film leaves us feeling comfortable enough to laugh is during the many quips and one liners, quite a few of them actually work.  As far as the rest of the performances go, Stallone is Stallone.  this isn't one of his more memorable characters nor one of his worst.  Jason Statham probably gives the most consistent and believable performance.  The ever likable Terry Crews makes you wish Stallone had given him more to do.  Jet Li is criminally underused.  Mickey Rourke is likable enough in a role that he sleepwalks through.

Where The Expendables does excel is in the action department.  Stallone unexpectedly relies on the caffeine addled shooting and editing techniques that seem like the antithesis to the brand of action he is known for.  He barely holds a shot long enough to give a complete or coherent view of whatever actions have taken place.  In hand to hand combat situations, the camera rarely pulls back to allow the audience to take in the choreography.  Thankfully Stallone doesn't overdo this and gives the action a visceral kick by ramping up the violence to cartoonishly brutal levels.  Like Rambo, The Expendables offers a level of violence that likely would have been cut by the MPAA in the Reagan era.  The reliance on CGI blood seems to give the bloodletting a freer feel, since actors likely don't have to do take after take and be reequipped with squibs and other appliances.  The fights themselves have a very WWE feel, with characters being thrown through the air and slammed as though they were in a ring.  Stallone also continues his fascination with the destructive effects of extremely high caliber weapons on the human body.  Craters are left in torsos and limbs are blown off.  This odd mixture of techniques  yields some thrilling results, and makes The Expendables worth watching for the third act alone.


The Expendables is a lumbering, sleeping giant that violently awakes out of hibernation during its final moments.  As it is, it will satisfy 80's action junkies itching for a fix.  It isn't as inspired or focused as either Rocky Balboa or Rambo, which both defied the odds to be superior entries in their respective franchise.  Nevertheless, it is enjoyable and establishes Stallone as a maestro of orchestrating insane graphic violence and elevating the fetishism of weaponry to poetry.  If this truly is the ensemble action extravaganza that Stallone had been waiting his whole career to do, one wishes that he might have thought of something more novel to say at this point in his storied career.