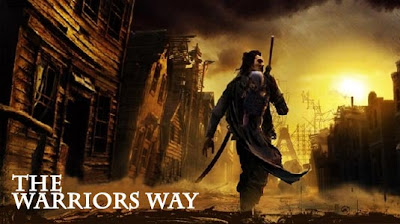 American westerns, Hong Kong chop sockies, and Japanese chambara films all serve a similar purpose.  Each one of those genres keeps the movie going populace of their respective countries connected to a mythic past that is based in actual history.  They also serve as a form of voyeurism for enthusiastic outsiders who are enamored with the exoticism of cultures unlike their own (such as yours truly).  In the early 1970's, the television series Kung-Fu, served as an early example of how the mythologies of both east and west could be combined in novel fashion.  True movie buffs realize that words like genre can sometimes be artificial constructs that enforce artificial boundaries.  Since shaolin monks and western gunslingers both serve a similar purpose, there is no reason they should never meet on the silver screen.

Surely, even Cain from Kung-Fu could never have anticipated the journey that Yang (Jang Dong Gun) would embark on in the upcoming The Warrior's Way.  Yang is a wayward Asian warrior that flees to the new land after refusing the orders of his master.  Upon arriving in a frontier town he is acquainted with Ron (Geoffry Rush), the town drunkard.  He also meets Lyn, a circus knife thrower.  His past comes back to haunt him when scores of ninja warriors track him down and lay siege to his adopted home.

The film itself is awash in green screen images and overhead shots depicting massive armies advancing on the enemy (the kind of shot that has become a standard of the fantasy genre in the wake of the LOTR trilogy).  The scenes in the frontier town have a color scheme that one can immediately recognize as being that of a dream land.  The images of countless ninja warriors lining rooftops and city streets before they take to the air and pounce on their prey is right out of the anime classic Ninja Scroll.  It all looks gloriously insane and will hopefully prove to be a much better example of Asian pop cinema than last years mediocre Ninja Assassin.

At worst, genre hybrids are shrewdly contrived vehicles meant to cynically tap into two different niches.  At best, they reveal the kinship between the genres they pair up and show the commonality between cultures.  While The Warrior's Way likely has no such lofty ambitions in mind, it should serve its purpose well enough by managing not to bore audiences.  It will also give the multiplexes a much needed dose of martial arts coolness during the fall season.

Posted by Unknown at 1:04 PM No comments: