Anime Review: Does "Iron Man" Represent The Next Step For Marvel Animation? 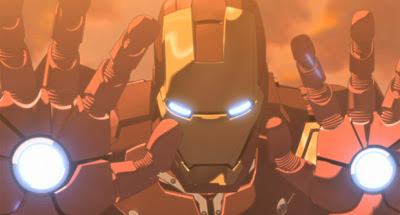 On the animation front, the House of Ideas has been getting soundly trounced by Bruce Timm and his crew over at Warner Bros. Animation.  While Marvel Animated productions have not been uniformly horrible, they have been unable to reach the bar set by the DC Animated Universe.  To make matters worse, the gap between the two seems to increase with each subsequent release from either company.  The straight to DVD offerings of the DCAU often have the feel of feature length films, or well conceived television pilots.  Marvel offerings often feel like barely passable accessories for fans.  A big part of the formula for Bruce Timm's success has been the influence of Japanese anime which has been prevalent from the very first episode of Batman: The Animated series.  Perhaps in a bid to bridge the seemingly insurmountable gap, Marvel Animation has teamed up with Japanese Animation studio MADHOUSE LTD. to produce anime iterations of some of their most famous characters.  The first one of these to see the light of day is Iron Man, the first two episodes of which have already aired in Japan.


In the first episode, Tony Stark arrives in Japan amidst swirling rumors that he will be retiring as Iron Man.  He plans to set up arc reactor stations that will serve as a source of clean, free energy for the Japanese. In order to ingratiate himself to the land of the rising sun, he puts on an air show featuring his latest creation: a variation of the iron man suit named Iron Man Dio.  After the Dio suit malfunctions during an aerial exhibition, Stark discovers that it may have fallen under the control of an organization named Zodiac.


In the second episode, Tony Stark is suspected of smuggling plutonium and is requested to speak in front of an investigation committee.  Instead of leaving his fate in the hands of investigators,  He dons the Iron Man suit and sets out to clear his name.  While tracking a stolen shipment of plutonium, he again does battle with a mechanized minion of the techno-terrorist organization Zodiac.

Any iteration of old shell head will have to contend with massive shadow cast by Jon Favreau's two blockbuster Iron Man films, which for better or worse have become the definitive version of the character for the general populace.  This makes it even tougher for any adaptation that looks to create its own identity.  The idea of an anime series based on a Marvel comics character brings any number of tantalizing possibilities to mind.  The cultural differences between East and West could possibly spawn a wholly original take on the character.  Sadly, the first two episodes of Iron Man do very little to either establish a fresh take on the character or to diminish the considerable lead that the DCAU has over Marvel Animation.


The character designs are about what you would expect from a quality anime production.  The Lines are clean and sharp.  The characters stand tall and even seem to curve in the directions of the blowing winds.  Tony Stark looks like he stepped right off the cover of an anime version of GQ magazine.  Scenes featuring the Iron Man suit are aided by computer graphics.  Everything with a metal surface looks as though it was immaculately cleaned and given an impenetrable wax coating.  Everything glistens with an ArmorAll sheen.  Perhaps this is a sly comment on the glitzy world that Tony Stark inhabits.  He always has to be ready to go in front of the cameras.

As is be expected in a quality anime production, the action scenes move at a "blink-and-you'll-miss-it" pace.  The first episode is a mundanely slow burn until a serviceable aerial duel between Iron Man and Iron Man Dio.  The second Episode features an extended chase book ended by similar robot battles.  Both sequences prove to be highlights, but unfortunately the drama motivating the action is a bit less than compelling.  This makes it hard to get too involved in anything that transpires.  Tony's interactions with reporter Nanami-Chan are initially cute but already show signs of growing tiresome and repetitive.


One major failing is the characterization of Stark.  Instead of the bombastically narcissistic playboy portrayed by Robert Downey Junior, we get a slightly mischievous pretty boy crusader.  This is not to say that the anime should simply ape the approach of the films, but it could have offered something a bit more engaging.  Throughout the duration of the pilot episode, Stark is a bland variant of the James Bond persona.  He is simply a well intentioned ladies man who pilots a robot suit. There isn't an ounce of pathos or inner turmoil to be found.  Anyone who has not read the comics or seen the films would be hard pressed to understand what drives him.  That is perhaps the biggest obstacle in Iron Man feeling like a fully conceived production.  Furthermore, if this series did not bare the Iron Man name brand, it would be nigh indistinguishable from any number of mecha anime series.


While it is always necessary to give any new series a few episodes to establish a momentum, Iron Man is off to very uneventful start.  The previews for the Marvel/MADHOUSE collaborations had us expecting something that would move at a breakneck pace.  Instead, we seem to have gotten a rather stoic and subdued Tony Stark plunked in the middle of a pedestrian espionage story.  Perhaps this is simply a rather slow build up to an amazing pay off.  The first episodes of Iron Man have gotten the series off to an uneventful start.  Either way, the series still has 10 episodes left to prove me wrong.

DVD Review: Ike Atkinson, Kingpin, In His Own Words 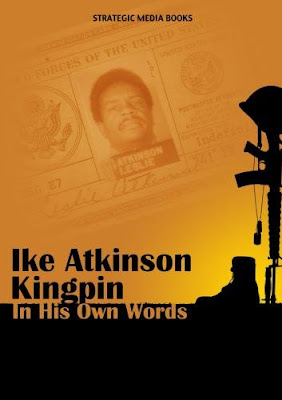 
Documentaries can sometimes be needlessly lavish and overcomplicated affairs.  They sport solid production values but have a superficial, glossed over feel.  The surface is never penetrated and no real insight is ever offered.  On the other end of the spectrum, many of the so-called hood/street documentaries that are all the rage these days are under-produced and unfocused.  They are poorly edited and cobbled together collections of testimonials from burn outs.  Such productions serve as a  ghetto form of self-aggrandizement.  Everyone, it seems, wants to immortalize the mythology of their hood.  Ideally, the best documentaries find the "sweet spot" between these two disparate extremes.


Ike Atkinson, Kingpin, In His Own Words is a DVD documentary and companion piece to Ron Chepesiuk's  excellent book Sergeant Smack: The legendary Lives and Times of Ike Atkinson, Kingpin, and His Band of Brothers (you can read my glowing review here).  It features exactly what the title describes: Leslie "Ike" Atkinson and only Leslie "Ike" Atkinson telling his own story.  Vintage news footage and photos are interspersed throughout.  Title cards listing milestones and achievements give perspective to many of the statements made.  However, Ike's narration creates a more intimate vibe than any book describing his life's experiences could possibly conjure. In a very warm and matter of fact tone, Atkinson touches on key points that the novel explores in much greater depth.  He talks about his early life in North Carolina, his tenure as a master sergeant in the United States armed forces, his propensity for gambling, and his trailblazing career as a heroin kingpin.

Ike Atkinson, Kingpin, In His Own Words was directed by Sergeant Smack author Ron Chepesiuk, who is like a ghost during most of the proceedings.  He does double duty as the interviewer, remaining completely off camera.  We are not allowed to hear a single question that Atkinson is asked for the first three quarters of the running time.  Not until the final quarter of the film do we hear Chepesiuk's voice, and even then it is only a faint whisper emerging from behind the fourth wall.  Gustave Flaubert once famously said "An author in his book must be like God in the universe, present everywhere and visible nowhere".  For the most part, Ron Chepesiuk holds true to that adage.

Seeing and hearing Ike Atkinson speak automatically dispels many of the misconceptions that viewers may have about what constitutes a gangster.  Unlike many Hollywood depictions, Atkinson is not a charming rogue or a scheming strategist (at least not on the surface).  He is also not a blood thirsty killer.  Atkinson is simply a person who peeped every angle of the game and got in where he fit in.  One suspects that his disarmingly "ordinary" nature is what allowed him to get as far as he did.  Go to any black barbershop or church in America and you are likely to meet someone like Ike.  He is likable, inviting, and able to suck you into a story very easily.  Towards the end, Atkinson emerges as what very few real life gangsters do: A human being.

Frank Lucas is of course mentioned, but Ike's conflict with him is wisely not made the focal point.  In fact, Atkinson is the most dismissive he has ever been in regards to the self proclaimed "American Gangster".  The only real drawbacks are the synthesized musical score (a soundtrack full of oldies that recall the appropriate time periods might have worked better) and the truncated running time.  Then again, this documentary is meant to be consumed with the book itself, or perhaps as a primer.  They both serve to fill out the complete picture of Atkinson.  A show like Gangland would undoubtedly provide slicker editing and a much more sensationalized account of Ike Atkinson's life, but the singular focus and subdued mood of Ike Atkinson, Kingpin, In His Own Words leaves the viewer feeling assured that he is indeed hearing the truth.