Short Film Review: Superman Finally Has His Rendezvous With Doomsday 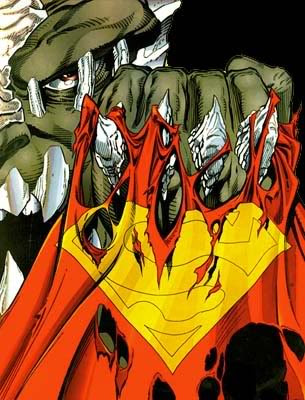 DC's "Death of Superman" storyline provided a much needed surge in sales for their flagship character.  In the last days before the implosion of the comic book industry, the media hype surrounding the event was something of a last hurrah for the medium.  Detractors found it to be more of a calculated publicity stunt than an actual story arch.  Though the actual quality of the it can be argued, it remains one of the more well known recent events involving the character.  Even if it wasn't actually good, the idea of comics most Christ like icon finally meeting his end might make for an entertaining film.  Alas, the so-so box office performance of Superman Returns all but ensures that such a  project may never see the light of day.  Although a Zack Snyder helmed Superman film is currently in the planning stages, Warner Brothers probably wouldn't be daft enough to revive their franchise with an entry in which the title character dies.  Thankfully, aspiring filmmakers toiling in the underworld of fan made trailers and short films are just that daft.

Someone by the name of Kashchei2003 has employed something called "after effects" to create his vision of what a "Death of Superman" movie should be like and has called it SUPERMAN: DOOMSDAY (MAN OF STEEL sequel) - The Death of Superman.  It is not so much a trailer as it a very resourceful short film.  It uses key scenes from recent well known blockbusters such as Superman Returns and The Incredible Hulk (among others) and edits them together into a surprisingly coherent whole.  Kashchei2003 even manages the neat little trick of turning The Hulk into Doomsday by superimposing the likeness of one character over the other.  The results are a bit less than "state-of-the-art" but they get the point across handily.  Portions of musical scores from a variety films are used on the soundtrack.  All in all, Kashei2003 has done a spiffy job of realizing his vision and makes a Superman/Doomsday film seem credible.  Never underestimate a resourceful and talented fan.

Posted by Unknown at 8:01 AM No comments: