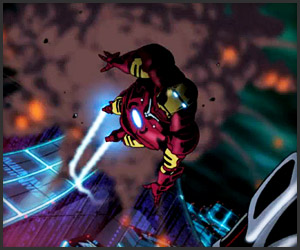 
In the third episode of Iron Man, titled "Project, Revived!", A rash of tornadoes overtakes Japan and kills key meteorological experts who once worked on the abandoned 'Tesla Project'.  Iron Man flies into the eye of one of the storms to find a mechanical behemoth at its core.  As Outa Nanami and Tanaka Chika uncover the secrets of the Tesla Project, Tony Stark aids in rescue efforts while trying to stop this latest technological menace.

"Project, Revived" shows improvement over the last two entries in terms of pacing and establishing a palpable sense of menace.  It shows a bit of influence from Japanese Kaiju, as natural disasters are no different from giant monsters in terms of the havoc they wreak on mere humans.  This influence can also be seen in scenes that show Iron Man confronting the machine itself, which dispatches giant mechanical hands the contain old shell head.   The threat level is upped considerably this go around.

The characterizations and drama still leave a bit to be desired.  There is an ongoing theme of Stark trying to ingratiate himself to the people of Japan, who remain skeptical due to his background as an arms dealer/manufacturer.  That makes for some nice little moments, but the antics involving Nanami Chan have a decidedly sitcom feel to them, and are a bit too reminiscent of the dynamic between Clark Kent and Louis Lane.  The characterization of Stark himself is still a bit bland, but we are allowed peeks at the shallow womanizer that lurks beneath the veneer of the selfless industrialist.

"Project Revived" builds up and maintains a steadier momentum than the first two episodes from the outset and as a result is a bit more satisfying.  However, it still feels way too mannered and stiff.  One keeps waiting for it to unleash the wild kinetic energy that seems to lurk just beneath the surface, yet the series progresses along much too cautiously.  Caution is never a word that should come to mind when thinking of anime, yet that is exactly what comes to mind while viewing Iron Man.  MADHOUSE need not be so reverent or careful with western mythology.  Come on guys, cut loose!
Posted by Unknown at 1:13 PM No comments: