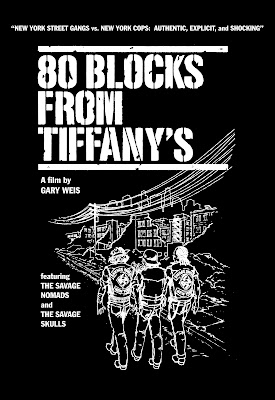 These days, films like The Warriors, Death Wish and Taxi Driver serve a dual function.  For movie buffs they are classics of their respective genres.  From a historical perspective they are also time capsule films.  They are a snapshot of the biggest city in the world as it teetered on the edge of oblivion.  The New York depicted in them is completely extinct, a museum piece.  Tourists and residents now walk and meander about in some of the very locations shown in these films without fear.  The South Bronx is perhaps the biggest example of this, having undergone so-called urban renewal since the late 80’s.  These days, it is mainly known as the acknowledged “birthplace” of hip-hop.  Throughout the 1970’s, it epitomized all that was wrong with New York City (and by extension the United States as a whole) at the time.  It had yet to be recognized as the proving grounds of phenomenon that would grow beyond its borders and take the world by storm. 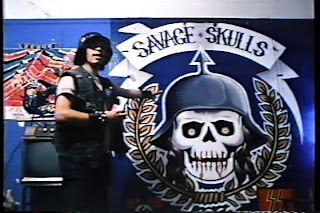 80 Blocks From Tiffany’s takes us inside the lives of two notorious Bronx street gangs of the time: The Savage Skulls and the Savage Nomads.  We see the adversarial relationship that developed between them and the cops that patrolled the neighborhoods they inhabited.  Much of this story is told through interview footage taken with both groups.  We see testimonials from former gang leaders such as “Blackie” and “Comanche".    Managers and club owners such as the fittingly named “Heavy” and local merchant Mrs. Ostrov describe how the gangs impacted their businesses.  Surprisingly, some saw them as a positive force.  Others saw them as a pariah  sucking the neighborhood dry.  It also gives us a peek into the rather mundane and aimless lives of the Savage Nomads and the Savage Skulls, two of the most notorious street gangs to have prowled the streets of the South Bronx in the 1970’s.  They harmlessly refer to themselves as “clubs” 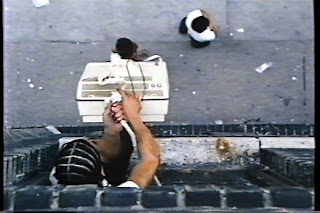 Via reenactments, we see some of the gangs' more underhanded activities.  The necessity of staging these portions of the film is obvious as gang members likely did not want to be captured on film burglarizing houses or hijacking trucks.  Perhaps in the current climate of popular media and self aggrandizement, today’s gangs would be all too eager to commit various felonies for the viewing public.  The barrier between voyeurs and poor people who resent being gawked at no longer exists.  Still, these reenactments provide a fascination all their own.  We see a young man scale the side of building like Spider-Man in order to burglarize an apartment.  He does so without the aid of ladders or ropes.  This leaves the impression that gang-bangers of decades past were both more inventive and physically fit. 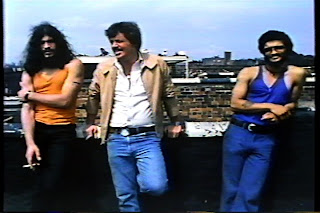 Aside from the obviously staged reenactments, the gangs themselves seem to lead a rather uneventful existence.  Their days consist of beer fueled bullshit sessions in squalid apartments.  This adds an air of sadness that was perhaps unintended by the filmmakers or the gang members themselves.  Whatever criminal activity these kids engaged in seemed to be an outgrowth of not only boredom, but an inability to picture another life for themselves.  What you see around you daily greatly impacts your ability to visualize yourself someplace else.  At the end of the day, for all the rapes and killings many of these guys brag about and confess to, they hardly seem truly evil.  More or less they are resigned to their fates.
80 Blocks From Tiffany’s was directed by Gary Weis over a number of weeks in 1979.  Gary did the short films on Saturday Night Live during its first few years, and much of that sensibility carries over into this film.  The gang members and their world are viewed through a prism that regards the sadness and desperation of the situation, but also takes note of the absurdity and unintentional humor of it all.  We see a pilfering hustler try to negotiate his way out of severe beating from a local.  Having grown weary of the pilferers rambling, the local simply “mushes” him in the face and sends him on his way.  The moment is amusing and slightly surreal, making the residents of these neighborhoods seem strikingly human.  Much of what they do is for show.
Overall, 80 Blocks From Tiffany’s doesn’t take itself as seriously as the equally fascinating Flying Cut Sleeves but it somehow more cohesive.  Flying Cut Sleeves was done with great empathy for the subjects.  80 Blocks maintains a certain distance, allowing other elements besides pity to creep in.  This could be viewed as condescension by less perceptive viewers, but in actuality it takes a view that is much more honest.  None of the people interviewed seem to grasp the reality of their situation, or the desolation in which they live.  Why should they?  For them it’s simply how it is, nothing more nothing less.  This kind of nonchalant attitude makes 80 Blocks a slightly more colorful documentary than its counterparts.
80 Blocks From Tiffany’s offers a rather sobering counterpart to fictional depictions of New York Street gangs such as Walter Hill's The Warriors.   Being a part of a street gang in the south Bronx during the 1970’s was hardly an epic adventure that promised immortality at journey’s end.  It was more about living and surviving in the harshest of circumstances.  Good times were savored and bad times were plentiful. 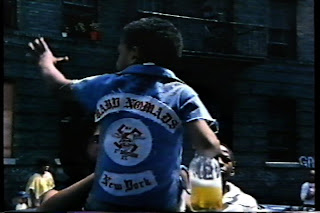 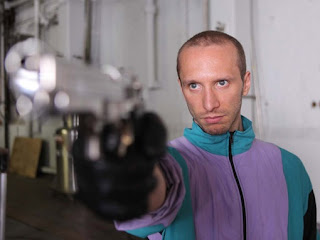 By Scott Tre
Hard choices have to be made as the “Asbo 5” come that much closer to fulfilling their destiny (whatever that may be) in this week’s episode of Misfits.  Alisha continues her relationship with Superhoodie, who is in the fact the future version of Simon.  Back at the community center, the quintet conspires to keep their powers secret from a new addition to their group, the young activist Ollie.  This proves unnecessary as they soon discover that Ollie was also blessed with superhuman abilities by the same storm as they were.  While going about their duties, the group is confronted by Tim, a nut job who quite literally sees the world in terms of his favorite video game, to the point where he lives it out in reality.  He is convinced that Simon is a man named Conti who owes him money.  Meanwhile, Nikki receives a heart transplant that has her feeling a bit strange.  Tim continues to stalk the group, who become engaged in his deadly game whether they like it or not.
The villain of this weeks episode, Tim, continues the theme of superpowers as extensions of one's obsessions/desires and character flaws.  He acts out the scenario of his favorite video game, the ultra violent Jail Break Auto.  Jail Break Auto is clearly a spoof of Rockstar Games' best selling Grand Theft Auto video game series.  Tim bears a striking resemblance to Niko Bellic, the protagonist of Grand Theft Auto 4.  Is he an example of the dangers of violent video games, or perhaps the dangers of getting to immersed in fantasy worlds of any kind?  Possibly, but I’d like to think that Misfits would never indulge such simple moralizing.  Either way, the character is truly frightening, killing people without the slightest hint of remorse.  His field of vision is exactly the same as the screens of his favorite game, almost as though he was wearing virtual reality headgear that perpetually kept him plugged into that world.
This episode also allows the interpersonal relationships between the characters to mature a bit.  Curtis and Alisha are both forced to acknowledge the reality of their awkward romance thus far.  Alisha’s affair with the future Simon reeks with foreboding and underlying menace.  Earlier episodes lead us to believe that Simon is a consummate weirdo.  He is also capable of killing.  Early on I suspected that he may intend to harm Alisha, but it quickly becomes obvious that he means only to love and protect her.  The feeling of dread comes from a sense that some unavoidable tragedy looms ahead.  Superhoodie is a bit too time conscious, planning his moves down to the millisecond.  He seems to know that something is coming, but what?  Alisha has finally found the intimacy she craves, but the things are developing at far too frantic a pace for her to truly savor it.
Misfits is now in full on superhero mode.  The action plays out longer, and the suspense wound even tighter.  While this results in more thrilling set pieces and plot developments, the show still does not abandon the themes that make it stand out.  As things progress, the “Asbo 5” are becoming more and more aware of the extent of their powers, and what use those powers can be put to.  Comic readers have always fantasized about what they would do with Wolverine's healing abilities, or a dose of super soldier serum.  Like the Marvel heroes, the “Asbo 5” has real problems and demons that stalk them at every term.  Each use of their powers has a ripple effect, creating consequences that they must deal with.  Like video games, the fantasies in our minds play out free of consequences and pain.  Real life rarely works out that way.  Misfits seems all to aware of that.  Even as I laugh at Nathan’s antics and drool over Alisha and Nikki, I fear what the future has in store for them.
Posted by Unknown at 4:18 PM No comments: