Trailer Review: Behold The Power of The Mighty Thor! 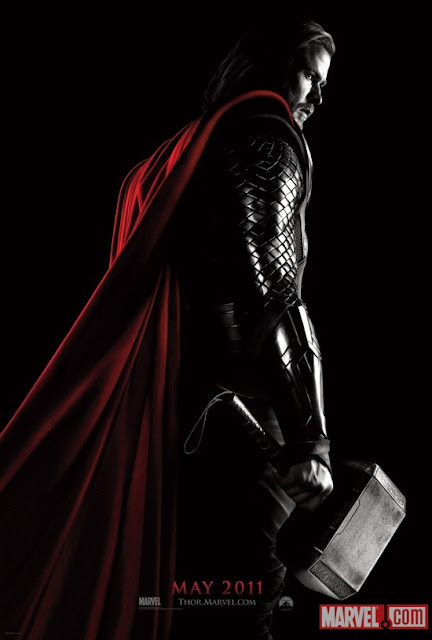 The world of Nordic fantasy has never been my bag.  That holds true for my taste in movies as well as my taste in comics.  My favorite superheroes are usually grounded in the realm of science fiction (either that or they are simply vigilantes with no superpowers to speak of).  The one thing that has always irked me about Celtic and Nordic fantasy is the absence of any real "rules" to govern the fantastical worlds that were created for them.  They usually focus on magic and the supernatural.  Wizards duel, and men and gods are allowed to share the same space.  Science Fiction, in my opinion, has always done a better job of establishing a reality where the fantastic seems plausible.  I know my summation will irk fans, but that is how I've always felt.  As far explanations for the fantastic go, a scientists laboratory will beat a sorcerer's cauldron any day in my book.

The one aspect of European myths and legends that has always intrigued me is the swordplay.  There truly isn't a more fearsome sight on this earth than two nordic supermen hacking away at entire armies with broadswords.  It appeals to the destructive child inside me.  Conan the Barbarian was great because it was more of a war/revenge movie at heart than true sword and sorcery adventure tale.  The magical elements of that world were mostly in the periphery.  Every once in a while these elements would make themselves known, but mostly the movie was just about how awesomely strong Arnie was.  Now at long last, it seems that Conan will have a blond haired counter on my short list of favorite nordic superheroes.  Most surprisingly, he will come by way of a comic that I had never cared much about....until now.

Kenneth Branaugh's adaptation of Thor has been big news for genre fans.  Along with Captain America: The First Avenger, it is the most anticipated superhero film of 2011.  Though I had never been into either character much, Thor appealed to me the least of the two for the reasons stated above.  Seeing the Comic-Con trailer that leaked earlier this year caused me to reconsider my stance.  It showed Thor to be a well manicured, heavily chiseled bar brawler.  The scenes between him and his father Odin (fittingly played by Anthony Hopkins) were awash in heavy handed melodrama, just the way I had always pictured them.  It showed the story of a God who was forced to walk among men as penance of some sort.  Regardless of my aversion to the source material, the ideas intrigued me.  Most of all, I enjoyed the shots of Chris Hemsworth in all of his beer swilling, 'roided up glory.

This new official trailer is a more compact version of the comic-con preview, with CGI that looks more detailed and finished.  It offers swooping shots of a shiny Asgard that looks as though it were constructed of giant church organ pipes.  It also has an amazingly cool shot of Thor being cast down to earth via what looks like a combination of a thunderbolt and tornado.  We also get one hell of an iconic image of Thor trying in vein to wield his hammer.    From what I can tell, Kenneth Branaugh's Shakespearean sensibilities seem right in line with the world envisioned by Stan Lee and Jack Kirby.  It's visually pleasing in a way that a former skeptic such as myself could never have anticipated.  I am now taken with the idea of gods and men occupying the same reality.  I have no doubt in my mind that this will appease fans and non fans alike.  Wow.