Book Review: Immerse Yourself In "The Art Of Drew Struzan" 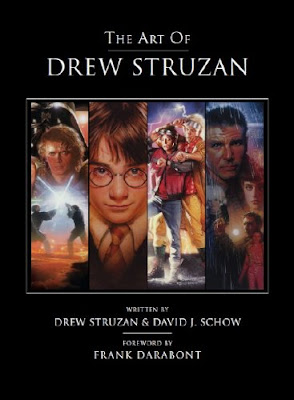 By Scott Tre
One of my earliest memories is when my parents took me to see Flash Gordon.  I was only three, so most of the trip is pretty foggy save for a few things that really stood out.  One of those things  was the souvenirs stand. I remember rows of magazines adorning a wall behind a cashier.  Each one was a merchandising tie-in for the films playing at the theater.  Each had the poster art from the film as its cover image.  My mother bought me the one for Flash Gordon, which came in pretty handy since I was too scared to watch anything that transpired on screen.  I don’t remember the actual contents of that Flash Gordon magazine, but I still vaguely recall the poster art.  To this day, the movie poster is a vital part of the movie going experience for me.
The Art Of Drew Struzan,  co-authored by Struzan and David J. Schow, collects much of the artist's movie poster work from 1981-2008.  It’s a wonderful throwback to the decade of the escapism.  Until very recently I didn’t know Drew Struzan by name, though I have been exposed to work much over the years.  He is responsible for the poster art for many of the most beloved film franchises of the 1980’s.  Those films comprise the foundation for my formative years as a movie buff.  Struzan’s paintings have become inextricably linked with them and are now synonymous with that entire era.
The book includes many “comps,” rough sketches that are rendered to present ideas and compositions to the studio brass.  The “comps” precede the finished works.  Each piece is presented in the order of the corresponding films release.  Each entry also includes narration by Struzan himself.  Struzan describes everything, from the genesis of his ideas and concepts to the mediums used to render the finished works.  He also describes his interactions with studio personnel.  His stories are equal parts funny, enlightening, frustrating and sad.  A certain melancholy underlines it all as Struzan describes how artists like him have been slowly fazed out of marketing process.   The writing is very straight forward as Struzan talks to his readers without an ounce of pretense.  His thoughts could not be relayed more directly if they were administered intravenously.  The reader is slowly drawn to Struzan’s side, all the while being amazed by his talent.
The heart of the book is the artwork itself, which has become iconic in its own right.  Drew Struzan’s posters are simply beautiful.  They are hypnotic, entrancing even the most casual passerby upon first glance.  His abstract compositions do something quite amazing: they are able to facilitate speculation on what the film could be, while being an accurate representation of the finished product delivered by the filmmaker.   The finished pieces are done with acrylic paint, yet they have a look so sharp and precise as to have been rendered by the finest point pen or pencil lead.  They look like comic book pencils rendered with a stark sense of realism.  I would say that Drew Struzan’s style resembles that of Bill Sienkiewicz, though I’m quite sure it’s the other way around.
Another delightful aspect of the book is how Struzan describes the relationships he developed with various filmmakers throughout his career.  Frank Darabont (who also wrote the forward) started out as an ardent fan of Struzan’s work but eventually became his friend.  Steven Spielberg and George Lucas remained friendly acquaintances throughout the years, even though the gradual expansion of Lucasfilm made their interactions with Struzan less intimate.  This separation was repeated exponentially throughout the industry, as Photoshop soon took the place of true artistry.  In the absence of Struzan and his like, movie marketing has turned into a bloodless, creative void.
The Art Of Drew Struzan is a flawless and indispensable coffee table piece.  Anyone who appreciates beautiful artwork can enjoy it, but for 70’s babies like me it will have a much deeper resonance.  Struzan’s posters were not merely advertisements, but living extensions of the films themselves.  Indiana Jones as rendered by Struzan is every bit as alive as he appears on the big screen.  Like any great filmmaker, Struzan has the ability to bring dreams to life.
Posted by Unknown at 8:34 PM