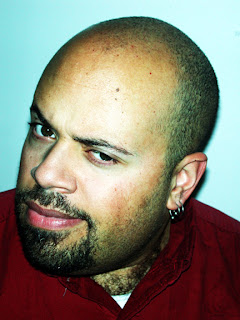 In part two of "Brothers Gonna Work it Out" (You can read part one by clicking here), Black Cinema expert David Walker talks about the experience of writing the hilarious faux trailer “Blackstar Warrior.”  He also talks about the trials and tribulations of making and marketing of his new film “My Dinner With A.J.,” as well as his upcoming novel.
Scott Tre: You were involved with that short Blackstar Warrior.  How did that project come about? 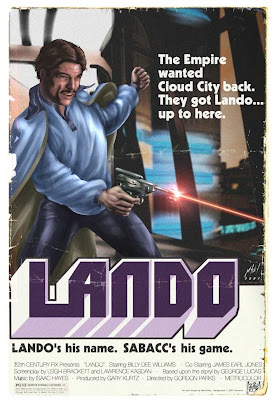 David Walker: Matt Haley, who’s the guy who directed it, is known more in the comic book world.  He’s a comic book artist.  Matt and I have been friends for a long time.  He wanted to break into film.  He’s had this film project that he’s been developing for a while.  As happens, it fell apart.  So he was really just jonesing to do a movie, anything.  I used to tell him “You should do a short or something like that until you can figure out what your feature is gonna be.

I co-wrote this thing with a friend of mine.  It’s the same premise as My Dinner with Andre which is two guys just sitting at restaurant having a conversation.  I was like can we put something together that’s compelling?  People will watch it for 80, 90 minutes.  Just two guys talk talking.  Can we avoid talking about certain things?  Like, how intelligent can we keep the conversation?  Can it be intellectual?  Can the discourse be like something that both a black audience and a white audience can relate to?  Maybe there’ll be some parts that a black audience that are like “Nah, Nah, I’m not feeling that” and there’s other parts of the white audience would go “What the hell are those guys talking about?”
So far we’ve only shown it to one audience.  I showed like a month ago and the response was tremendous.  The audience was stacked with enough people that knew me that I felt like I’m not 100% sure how other people are going to respond to it.  My buddy Mike Dennis in Philly, he runs Real Black TV and he does a screening series in Philly which is a great city to take your film to.  It’s a very film savvy community there.  Cross culturally very film savvy.  New York as well, parts of New York.  That whole northeastern part of the U.S., that’s where the true challenge is.  I wanna set up screens in New York, Philly.  Not Boston so much, but D.C. for sure.  I don’t know how it would play down in Atlanta.  I don’t get Atlanta at all (laughs).  Over the next several months that mostly what I’m trying to push out there.
Unfortunately the guy that I co-wrote this thing with who is a good friend of mine, we had a falling out.  Which is completely a case of life imitating art (laughs).  So I’m sort of on my own in getting the film out there.  I don’t have someone helping me at the festivals.  I’m worried that it’s going to be slower going than I thought it was gonna be, but I don’t hate it.  The worst part of it is I’m in it, and I’m not much of an actor.  The worst part of it is just looking at my mug for 82 minutes.  I think that both black audiences and white audiences will be able to connect with it.  The conversation itself is more about how do you remain true to yourself.  So we talk a lot about what it’s like to have a dream and put that dream aside.  In this case two guys who are friends have been trying to make a movie and then failed miserably at it.
Unfortunately, People talk about the great American success stories, those are few and far between.  There’s a hell of a lot of great American failure stories out there (laughs).  I guarantee you if you’re standing in line at the grocery store, at least one other person has their story of epic failure.  But I don’t think that’s anything to be ashamed of.  I think if you get knocked down you just sort of get back up.  Success in and off itself is a process.  It’s the journey more than the destination, which is the only thing that’s kept me from shooting myself over the years.
Scott Tre: Is there anything you’d like to say in closing?
David Walker: Yeah.  I need to hustle a little bit and be a pimp.  I’ve got a novel coming out.  It will probably be out in March of this year.  The book is done.  I’m working on the final edits of it.  I’m working on the cover design.  I finished writing it over a year ago.  My agent shopped it for a good eight or nine months.  Every publisher in North America has now rejected my book.  It does wonders for the ego, that’s for sure.  In the last several years I’ve done a lot of volunteer work with kids with severe disabilities and at risk gang kids.  I just sort of got recruited into doing it.  People were like “Hey, you’re a guy who’s been through a lot.  Maybe you could help these kids out.”  I took to working with these kids in one capacity or another.  I was motivated to write a book that teenagers might read.  I grew up reading The Three Investigators and The Hardy Boys and bullshit like that.  Now kids have Harry Potter or whatever, and Twilight.  Few of those books actually have any characters that are of color, whether it’s Hispanic or black or Asian.  When they do have them usually the characters are clichés.  They’re not the heroes.
So I decided to write this novel, which is a young adult action adventure novel about a black teenager who’s about to go to prison but instead he gets sent to this rehabilitation program where he goes to work for the world’s greatest superheroes.  So he’s the guy mops the floors and does the laundry and all that sort of crap for the equivalent of the Justice League or The Fantastic Four or something in regular comics world.

The agent that I got fell in love with the book and he’s a pretty solid literary rep.  I have a manager who loves it.  There’s been interest in Hollywood, but not a single publisher wanted the book.  And they all kept saying the same thing:  Teenage boys don’t read books.  It’s not girl friendly enough.  To which I kept responding Well maybe the reason teenage boys don’t read books is because all the books out there suck.  What teenage boy in his right mind is gonna wanna read Twilight?  Twilight is crap.  After a year of hearing all that stuff and doing research and realizing not just the philosophy that teenage boys don’t read, especially black teenage boys, but that men don’t read either, I was like maybe that’s true but someone’s gonna read my book.
So I just self-published this thing, which has been incredibly difficult.  I’m just sort of putting all that stuff together, laying the ground work out there, but I’m still gonna do it.  All the things that I’ve done including BadAzz Mofo and all of that, I’m not ashamed of anything I’ve ever done.  I’m ashamed of a couple of women that I’ve dated (laughs), but I’m not ashamed of any of the projects I’ve ever undertaken.  My novel is like it.  I was in the hospital last month, I was really sick.  I had pneumonia which had spread to my heart and the doctors are of course preparing me for the worst.  I was like I’m not going anywhere.  As I was laying in the hospital bed I just kept thinking You know the reason I can’t die is because the best thing I’ve done is still sitting on a computer somewhere and it hasn’t been put out into the world yet.

Someone just told me the other day that everything they know about Blaxploitation movies they know from reading things that I’ve written.  That’s great.  I feel real honored that people think that way.  I think that this book that I’ve written is head and shoulders above all of that because what I’ve done is I’m giving the world the first real black superhero that’s not like a joke (laughs).  Don’t get me wrong because I love every black superhero there has ever been, but that doesn’t mean at some point I didn’t hang my head in shame and go “I can’t believe this guys wearing a yellow Disco and a metal head band (laughs)”.
The world of hip-hop gave us some great heroes, but a lot of them are steeped in the more negative aspects of our culture.  Well not our culture, that’s bullshit.  Black culture is not all about crime and violence and all that sort of stuff.  I just wanted to create a character that was still kind of bad ass and can do some pretty great things but isn’t like Snoop Dogg (laughs).  I’m not saying anything against Snoop Dogg.  I wanted to create something different than what’s out there.  Six months from now I’ll still be pushing this movie My Dinner With A.J., but the book that I’ve written is it.  It’s supposed to be the first in a series of three books.  That’s really where I’m channeling a lot of my energy as I get older.  Because making movies, that’s like a young man’s game, man.  You start hitting your forties and its “Oh God, I don’t know if I can do this crap anymore.”  Sitting at a computer writing is not that draining.

CLICK HERE TO READ PART ONE IF YOU HAVEN'T ALREADY!
Posted by Unknown at 2:35 PM