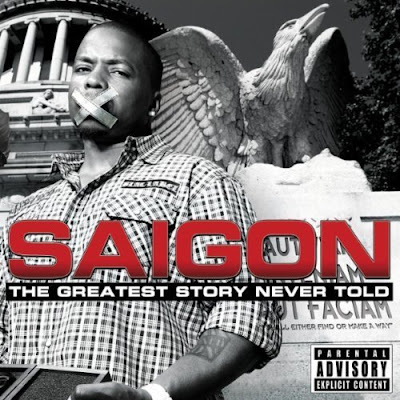 After many delays, Saigon’s debut LP The Greatest Story Never Told finally arrives.  As previously and repeatedly announced, Just Blaze handles the bulk of the production.  When judged on its own merits (sans unrealistic expectations or cynicism), supporters and detractors alike may find themselves surprisingly in agreement.  If nothing else, The Greatest Story Never Told is consistent in both theme and execution.
"The Invitation" is a standard yet solid album opener, suitably boisterous and celebratory.  Just Blaze supplies rousing gospel singing and organs.  Q-Tip plays hype man, shouting out the names of various correctional institutions in roll call fashion. Saigon laments the cycle that keeps black men beholden to the drug game and the prison system.  His flow is passionate and evenly measured.
On DJ Corbett’s pop chart ready foundation for "Bring Me Down Part 2," Saigon testifies to his own resilience and perseverance.  This makes the song reminiscent of similar efforts by Eminem.  The synthesizer heavy, ballad like construction only adds to that effect.  It isn’t necessarily bad, but it feels a bit overdramatic and out of place with what has come before.
The delicately sparse piano keys of "Enemies" culminate into a sad groove.  Producer D Allen provides ample support to Saigon’s tale of betrayal.  The enemy in this case are “the streets” themselves.  Saigon bitterly chastises them for leading him and many other young black boys astray.  The emotion is a tad forced, but the concept is dope and Saigon gets his point across effectively.  The all too brief "Friends" covers similar territory in a different manner.  Two piano keys dip their toes into emptiness as Harpsichord strings prickle away.
The LP really hits its stride with the uplifting title song.  Just Blaze loops a soulful groove that carries the listener along on a comfortable rush.  The track just feels right, both in and of itself and as background accompaniment for Saigon.  The listener is even treated to some actual cutting by a DJ.  Saigon starts out braggadocios but then settles into observations and critiques of society.  The lyrics draw inspiration from the heyday of hip-hops politically conscious movement.

“Clap,” featuring Faith Evans, is another heavy dose of soul, administered in blatantly inspirational manner.  Faith provides her usual fluffy chorus.  Similar to "Bring Me Down Part 2," the song feels a tad too obvious.  It literally morphs into a Gospel record by the end.  This is where the “conscious” aspect of the album begins to test ones patience.
Kanye West provides musical backing on "It’s Alright" that’s a bit minimalist compared to what we’ve been hearing from him lately.  An emotionally affecting sample is placed atop drums that somehow feel too basic.  Saigon seeks salvation for his people as Marsha Ambrosius croons the chorus.
“What Lover’s Do” teams Saigon with Devin the Dude over a lively yet sexy soul sample.  It’s both crass and humorous, making for a welcome change of pace.  It’s good to see Saigon drop the conscious pretense for a bit and show his typically male side.
The “Yardfather” gets back to contemplating the plight of his people on “Better Way.” The song features Layzie Bone on the chorus and has a lovely piano loop that conveys the seriousness of the subject matter while feeling light as a feather.  At the end, the track dissipates into a soothing instrumental with no drums.
Clocking in at an excessive 18 tracks, The Greatest Story Never Told is far too long.  The listener’s endurance begins to flag during the final stretch.  The repetition of themes becomes monotonous, especially when similarly themed songs are placed right next to each other.  It’s as if the album took so much time and effort to record that Saigon could not bare to scrap anything.
On The Greatest Story Never Told, Saigon tries valiantly to establish himself as an icon and standard bearer.  While he doesn’t exactly achieve that objective, he does manage to deliver a solid and cohesive album that would have benefited greatly from a bit of trimming.  Those weaned on current sounds and production techniques may find it dated, but for traditionalists like me, The Greatest Story Never Told makes for a very comfortable fit.
Posted by Unknown at 3:27 PM