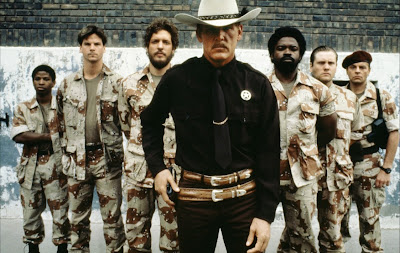 Twenty three years ago on this very day, I saw what I thought at the time to be the grittiest and most violent action film ever made.  I also thought it to be the first of its kind in terms of tone and style.  Age, maturity and a growing knowledge of film would eventually prove me wrong.  However, I still hold a special place in my heart for that film.  While it might not be as monumental as it first appeared to me at the tender age of eleven, it is a solid example of 80’s action.
On my eleventh birthday, my father rented a movie called Extreme Prejudice.  He had been attracted to the title by the presence of Nick Nolte and the cover art, which depicted an old west style gunfight.  That night, three of my aunts came for their weekly visit.  My aunts, all older Jamaican women, had fairly tender sensibilities.  My father had always been oblivious to such things, and the absurdity of screening an R-Rated action film in the presence of such a crowd never crossed his mind.  He popped the cassette into the VCR.  No one in that room, including me or my father, had any idea was to be unleashed upon us.
Childhood friends Jack Banteen (Nick Nolte) and Cash Bailey (Powers Boothe) have taken wildly different paths in life.  Jack is now a hard nosed Texas Ranger.  Cash has become a powerful drug lord with an entire army to back him up.  Jack wants to take him down without killing him, a task that proves easier said than done as Cash is now drunk with power.  As if that weren’t enough for Banteen to contend with, a group of well armed and highly trained ex-soldiers begin robbing banks in West Texas.  Their leader, Major Paul Hackett (Michael Ironside) harbors a secret agenda that reveals itself much too late.  As all of these warring parties converge on Cash Bailey’s compound, a gun battle of apocalyptic proportions becomes unavoidable.
Extreme Prejudice was released in the spring of 1987 to a largely indifferent public.  It made about 11 million dollars at the box office before moving on to the Valhalla of home video and cable television.  It had been written by macho mythmaker John Milius and directed by a man who would become a very important figure in my early development as an action film addict: Walter Hill.
In Extreme Prejudice, Walter Hill had crafted a film that simultaneously scarred and delighted my eleven year old mind.  The dialogue was rife expletives.  Characters were gunned down as though murder were the most natural thing in the world.  Bullets punched crater sized holes into flesh that spewed forth dark burgundy blood.  The carnage unfolded in glorious slow motion and from multiple angles.  The weapons ranged from revolvers and semi-autos to shotguns and submachine guns.  The ending was an orgy of blood and bullets.
I didn’t understand what I had seen, but I knew I wanted to see more.  I was convinced that the director must have invented this kind of film.  I learned his name, and two years later I began to seek out other films by him.  Movies with names like Johnny Handsome and The Warriors soon became personal favorites.  Walter Hill became my favorite filmmaker.  As far as I was concerned, no one shot action better than him.
Seven years later, I found out just how wrong I was.  A restored director’s cut of Sam Peckinpah’s The Wild Bunch had been given a limited re-release.  A newspaper article proclaimed it a trendsetter and Peckinpah the maestro of movie violence.  It even suggested that all other action directors were pale imitators.  I balked.  How could a movie I never heard of be better and more influential than any of my favorites?
I rented The Wild Bunch later that year.  The opening gun battle confirmed my worst fears.  The action in The Wild Bunch played the exact same way as the 80’s action films of my youth.  The Wild Bunch is now among my very favorite films.  This exact same experience would repeat itself later on that same year when I saw John Woo’s A Better Tomorrow for the first time.  Begrudgingly I accepted the truth.  Extreme Prejudice was in no way an absolute original.
Now, many years later, I realize that Walter Hill was not a pioneer so much as he was a carrying on an established tradition.  He is still among my favorites.  Though Sam Peckinpah and John Woo have surpassed him in my eyes, but I still thank him for introducing me to a style of action movie making that I love to this day.  Extreme Prejudice is still a joy to behold, and a film that my father and I have a great fondness for.
Posted by Unknown at 7:55 AM