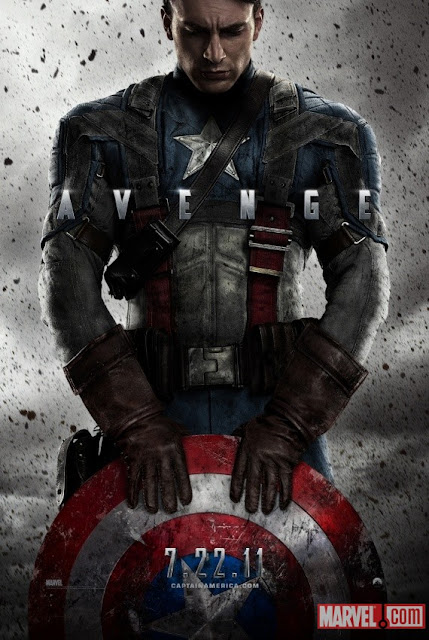 After the glorious summer movie season of 2008 gave us four comic book adaptations that ranged from very good to great (Dark Knight, Iron Man, Hellboy II: The Golden Army, Wanted, The Incredible Hulk), 2009 stumbled out of the gate with the ambitious yet ultimately disappointing Watchmen.  Then, the summer movie season of 2009 opened with the abysmal X-Men Origins: Wolverine.  Together, both productions seemed to be signaling the death knell.  Just like any other genre, superheroes need rejuvenation and retooling from time to time.  If the genre is to last, it needs to constantly reinvent itself. The modern superhero film is still relatively young, and not out of the experimental stages as of yet.  For it to die a premature death would truly suck.

Last night, during the worldwide telecast of Super Bowl XLV, the world was treated to its first glimpse of Captain America.  Captain America: The First Avenger was easily the crown jewel in the customary collection of movie trailers that accompany the biggest football game of the year.  That’s not to say it was the best, just the most anticipated.  Ever since footage was premiered at last year’s Comic-Con, everyone wondered how Chris Evans would fare as Cap.  The photos that have leaked and appeared in publications like Entertainment Weekly gave us an idea of how things would look, but there’s nothing like seeing all of those elements in full motion.  That is the true litmus test.
As the trailer begins, Dr. Abraham Erskine (Stanley Tucci) explains the pros of the super soldier program to its first beneficiary.  Steve Rogers (Chris Evans) is a puny young man, but inside his delicate frame beats the heart of a true patriot.  “Project: Rebirth” gives him a chance to serve his country in the way he’d always dreamed: as a warrior.  Once infused with an experimental serum, he emerges a robust and powerfully muscled he-man, but still retains the goodness and patriotism that had always been a part of his character.  He is then put in charge of the “Howling Commandos,” and sent to engage the tyrannical Red Skull (Hugo Weaving) in battle.  So goes the birth of the First Avenger, Captain America.
Though Chris Evans quite famously bulked up for the role, we see a scrawny Steve Rogers being prepped for “Project: Rebirth.”  This is presented briefly and in a very casual fashion.  The filmmakers wisely don’t allow us to dwell on it for too long.  After a muscular Steve Rogers emerges from the chamber, we then seem storming Nazi strongholds full regalia.  I’ve no idea as to whether Evans is the “definitive” choice for Captain America, but he doesn’t look at all out of place in the getup.  The design is, of course, from the “Ultimates” iteration of the character.  Another good choice seeing as how the various straps and pockets make it look more combat ready than the traditional costume.  The Red Skull can be viewed with the aid of the pause button.  Screen Caps reveal the Makeup job on Hugo Weaving to be quite convincing.

Director Joe Johnston has always struck me as a poor mans Spielberg, and I think that may serve him well here.  While the teaser for Captain America: The First Avenger doesn’t reveal anything really mind-blowing, it does show a film that seems to be right in line with what is required for this character.  Chris Evans has clearly risen to the occasion, and Joe Johnston seems to have created a world where old fashioned heroics seem not only plausible, but appropriate.  Just as Captain America himself is the successful result of a grand experiment, Captain America: The First Avenger represents the next phase in the ongoing experiment that is the modern superhero film.
Posted by Unknown at 3:20 PM