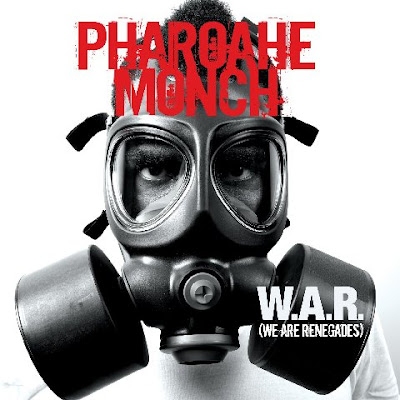 Like the mythical Sasquatch, underground phenomenon Pharaohe Monche rarely makes an above ground appearance.  Fortunately, he has returned from self imposed exile to deliver his junior solo set, W.A.R (We Are Renegades).  This time out, Monche has fashioned his vision into a desperate broadcast meant to wake a nation out of its collective apathy.  A feeling of urgency informs the entire album.  It alternates between two different modes of message delivery: serene and disruptive.
"Calculated Amalgamation" is a thunderous wall of noise that cascades out of the heavens over the listener.  It’s musically dense, with crashing high-hats, synthesizers, and violins.  It could be considered organized chaos, or confusion (pun very much intended).  Monche hides his urgent message inside a puzzle of braggadocio.
The very affecting "Evolve" is characterized by the tolling of bells and the sacred singing of a choir.  It instills the heart with doom, but also elevates the listener above the clouds with its soaring grandeur.  The dread it inspires is oddly freeing.  Monche drops conceptual jewels amidst a flurry of ego infused braggadocio.  A saxophone unexpectedly joins in the musicality.
The feeling of urgency returns on the title cut “W.A.R.”  Immortal Technique provides the hook, mobilizing the listener into militant action.  New world order themes abound as Monche warns of nefarious plans underway by the way by the powers that be.  Vernon Reid gives an impassioned guitar solo.
The uproarious anti-police brutality anthem "Clap (One Day)" is a treatise of frustration that is on the verge of going nuclear.  Monche’s disdain for rogue cops is barely contained.  The soulful and warm “Black Hand Side” embraces the listener with vibes of genuine concern and sincerity.  The gradually elevating violins eventually dissipate into three stabbing horn notes, evoking feelings of the rising sun.  Styles P’s verse is a verbal photo album of tragic scenes taking place in the black community.
"Let My People Go” has the pronounced vibe of a church revival.  Monche’s verse takes on the cadence of a black baptist preacher.  He even goes into full on singing during the chorus.  This approach is amusing in its boldness.  On “Shine,” the reverberating toll of xylophones radiates outward like ripples in a pond.  The beat stutters and stops as if trying not to trip over itself.  Monche provides a vivid picture of the environment that produced him:
Where I'm from, we do not eat organic (talk about it)
You see my mama can not afford Whole Foods
She break fast for the bread, call it soul food
"Haile Selassie Karate," produced by Samiyam, relentlessly chops up a sample from the Stylistics classic “People Make The World Go Round.”  Monche’s multis and metaphors become incredibly dense here.  Things settle into a back-to-basics mode with “The Hitman.”  Producer M-Phazes employs the same aesthetic here as he does on “Clap.”  Monche makes some amusing comparisons between oral sex and the way recording artists accommodate execs and radio outlets.
“Assassins” is a lyrical head cutting session featuring Jean Grae and Royce Da 5’9”.  Jean Grae’s opening verse hits like a Mack truck and demands multiple listens.  Pharoahe and Royce don’t get completely shown up, but Jean makes them work for the photo finish.
The orchestral rock grandeur of "The Grand Illusion (Circa 1973)" is epic in scope.  Monche shows a flare for the cinematic.  The album closes out on an uplifting and melodic note with “Still Standing,” which plays as a closing credits selection for the preceding epic.  The lovely Jill Scott adds to the soulful vibe while M-Phazes shows another shade to his production style.
None of the selections on W.A.R are whack, but some feel a bit uniform in their construction.  Monch adheres a bit too much to traditional east coast boom bap when it is apparent that his musical range is a bit broader than that.
With W.A.R, Pharaohe Monche solidifies his status as one of Hip-Hops unsung and undervalued talents.  His dense lyrical construction courts the patient and thoughtful listener.  W.A.R is a carefully constructed manifesto that attempts to wake conscious rap out of its slumber.  In a climate where content has become an endangered species, Monche does what he can to stave off its extinction.
Posted by Unknown at 4:48 PM