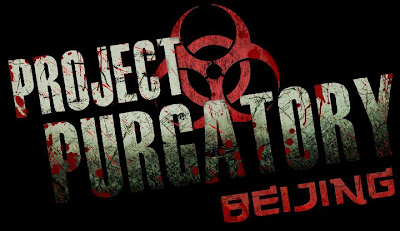 When I interviewed Kantz a while back, (click here to read the interview) he spoke of creating a "hybrid film" that merged the genres of horror and martial arts.  At the time it sounded a bit odd to me, but I had conveniently forgotten how popular video games such as the Resident Evil series had been combining elements of horror and action successfully over the last fifteen years.  Then there are the many recent zombie films that casually alternate between guns and fists as a means of dispatching the undead.  At this point, the inclusion of martial arts into that mix would be a natural evolution.

Well, Kantz is well on his way to fully realizing that vision.  He recently released the first ten minutes of his upcoming Project Purgatory Beijing.  Just as popular video games such as Resident Evil and House of the Dead were inspired by the zombie epics of George Romero and the like, Project Purgatory Beijing derives inspiration from those games as well as various other sources.  As Kantz promised, it employs a Tony Scott style visual aesthetic.  This handy synopsis offers a concise breakdown:
"Martial arts mayhem, combined with gamer style action meets the zombie apocalypse in a full out war against the undead in Project Purgatory Beijing. China, a deadly designer virus has decimated the country leaving very few people alive. A side effect of the virus has turned the dead into raging, savage cannibals, and they are hungry. A handful of survivors led by Team Z; is a group of deadly mercenaries that have been elected to protect the last remaining citizens of the compound" (Kantz).
Upon its completion, Project Purgatory Beijing should easily find an audience in the current marketplace.  It contains all the necessary elements to appeal to modern fandom.  Kantz is very much a pop culture connoisseur, and he seems to be using everything at his disposal to create something that will be engaging from a visual standpoint.  Though I prefer actual squibs to CGI rendered blood and bullet hits, I accept the latter as the way of the future.  It will be interesting to see where Kantz takes this zombie demolition crew in the finished product.  Anyway, here are the first ten minutes of Project Purgatory Beijing:
Posted by Unknown at 7:25 PM