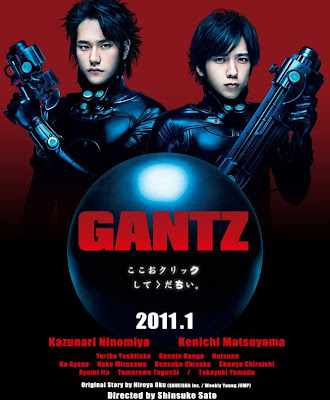 After being killed by an oncoming subway train, Kei Kurono (Kazunari Ninomiya) and Masaru Kato (Kenichi Matsuyama) awaken in the afterlife, or so they think.  They come to in an unfurnished room surrounded by others who have also been killed in various ways.  At the far end of the room lie a mystical black orb that identifies itself simply as “Gantz.”  Gantz instructs all present that they are to track down and terminate an extraterrestrial target in an allotted time period.  To aid them in their mission, Gantz equips each of them with high tech weaponry and equipment.  This scenario is repeated nightly, and functions as a game of sorts.  Every time a target is destroyed, Gantz doles out the requisite number of points to all “players” for their participation.  The first “player to reach the century mark can either earn their freedom or bring a loved one back from the dead.
Gantz is an adaptation of the popular manga and anime series of the same name.  It’s the first of two films that attempt to condense the serialized story into something fit for mass consumption.  It also attempts to stay reasonably faithful to the source material while remaining within the confines of what is deemed acceptable for a mainstream film.  The result is a sci-fi/action hybrid that while compromised in some regards, still provides ample entertainment value.
The costume and set design are pretty much standard for almost every science fiction film released in the wake of The Matrix.  The protagonists are outfitted in form fitting gear made out of leather, vinyl, or some other shiny material.  The action takes place mostly at night on deserted streets.  Pedestrians and innocent bystanders are never seen.
While the environment is aptly “urban” and contemporary, there is streamlined and antiseptic feel to it all.  This is exemplified by the perfection of the shiny form fitting costumes.  Lots of things in this world exist within the confines of sharp, concise outlines.  Everything suggests deliberate and meticulous placement.
The action is coherent, though the quick leaps and movements of the characters sometimes cause the seams to show in the CGI.  There is a noticeable “blur effect” that can be seen whenever a character executes a maneuver with superhuman speed.  The dark lighting masks it to an extent.  The physics on display during the melees adhere to that of superhero comics.
The source material is notorious for its generous helpings of sex and violence.  While the sexual content of any kind is pretty much non existent in the film, there are ample gore and slime effects to keep aficionados happy.  Most of the bodily destruction on display comes at the expense of the extraterrestrial targets.  Liquids of all colors and consistencies spray about in a similar fashion to blood from severed arteries.  The film takes a child like glee in soaking every available surface with bodily fluids.
Gantz scores considerable points by populating itself with characters that are easy to invest in.  Kenichi Matsuyama exudes self doubt and anxiety.  Kazumari Ninomiya becomes frightening in a very low key way as he morphs into a reckless adrenaline junkie.  Both characters endure plausible transitions through the course of the film.  As Natsuna Watanabe possesses an unrelenting cuteness that gives her character a deer in headlights quality.  All of the performances are undermined by a laughably exaggerated English dubbing job that lacks any nuance or subtlety.
From a story standpoint, the film is less than coherent at times.  Not much is offered in the way of explanation or purpose.  Things happen and the viewer is expected to keep up even though the scenario is a bit vague.  In some ways it works to the films advantage.  The viewer is just as disoriented as the characters, and the environment/situation seems truly alien.  While that effect might not have been intentional, it elevates the tension.
Gantz is an intriguing introduction to a weird new universe.  While it feels a bit skeletal, it does manage to peak the viewers curiosity.  I suspect that many people will stick with it until the very end, if only to understand what the Hell is going on.  Assuming that the upcoming Gantz:Perfect Answer provides exactly what it’s title implies, this will have been a worthwhile endeavor.
Posted by Unknown at 2:11 PM