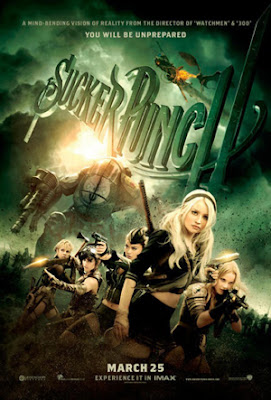 Baby Doll (Emily Browning) makes a desperate attempt to rescue her sister from the hands of their incestuous father.  Her mission ends tragically, landing her in a nightmarish mental institution where she is immediately scheduled for a lobotomy by a corrupt orderly.  In order to cope with the hopelessness of her situation, Baby Doll retreats into an elaborate fantasy world of her own design.
Once there, the asylum is represented by a burlesque stage show that is actually a brothel catering to high level underworld clientele.  The virginal Baby Doll is the newest arrival in a troupe of dancers who also provide sexual services.  She is set to be deflowered by a mysterious high roller who is a friend of the club’s owner, Blue.
In order to avert this horrible fate, Baby Doll convinces fellow dancers Amber (Jamie Chung), Blondie (Vanessa Hudgens), Rocket (Jenna Malone), and Sweet Pea (Abbie Cornish) to join her in an elaborate escape plan.  All that is required is for the girls to recover five items under the nose of their brutal boss.  This elaborate fairy tale is actually representative of Baby Doll’s real life struggle to escape the asylum before her lobotomy.
Sucker Punch is essentially a vanity project for director Zack Synder.  It’s the first of his films that is not a remake or an adaptation of preexisting material.  Working from a script fashioned by himself and Steve Shibuya, Snyder indulges every modern fanboy obsession known to man in grand style.  He allows his id to run wild while using his considerable eye for visuals as weapon against the audience.  This is to the detriment of just about everything else in the film.

The visuals are admittedly stunning.  They are derived from just about every major geek enthusiasm imaginable:  anime, steam punk, Celtic fantasy, and video games are all represented.  The action scenes are fantasies within a fantasy and as such they feel detached from the rest of the film.  Snyder presents them as impeccably rendered cut scenes from a cutting edge video game.  The sense of detail on display is amazing.
The action scenes themselves are nothing ground breaking.  They alternate between being adequately coherent and frenetically confused.  When the action slows down for the kill moves, the audience is obviously meant to be in awe of how cool it all looks.  Other times, the camera intrusively zooms in and attempts to be a part of the action.
Sucker Punch suffers from the same flaws as 300 and Watchmen, though to a much greater detriment.  It places style over substance to an unsettling degree, while all the while it absolutely refuses to shed any of its obvious pretensions.  From a storytelling standpoint, there is not an ounce of genuine ambition on display.   Absolutely everything in the film exists to facilitate the elaborate visuals and often nonsensical action.  As a result, the visual style feels overdone and tedious as opposed to engaging or awe-inspiring.

The performances from the principle cast are sincere.  They struggle to add some gravitas to offset the weightlessness of the fantasy world they inhabit.  Oscar Isaac is a true standout as the diminutive and domineering Blue Jones.  He provides a sense of menace that is sorely lacking in the any of the other “bosses” that Baby Doll confronts in her fantasies.  Emily Browning is a protagonist in the most standard and basic sense of the word, though she tries to inject a bit of personality into Baby Doll.  The sisterly bond between her, Abbie Cornish, Jamie Chung, Jena Malone, and Vanessa Hudgens feels authentic.  Had these characters been in a better film, their exploits might have been more engaging.  As it stands, they provide Sucker Punch with a slight air of humanity.
Sucker Punch is a visually arresting but ultimately hollow and annoying technical exercise.  What little story it has never materializes into anything resembling a coherent narrative.  It’s essentially a demo reel meant to show off the capabilities of state-of-the-art home theater systems.  It may eventually cultivate a following among tech enthusiasts and undiscriminating fanboys, but any further penetration of the pop culture zeitgeist is unlikely.   Zack Snyder couldn’t have made his limitations as filmmaker more apparent if he tried.
Posted by Unknown at 7:02 PM