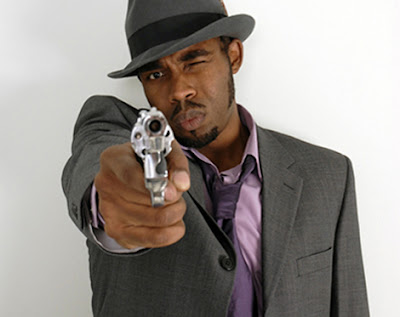 There was a brief but shining moment when the best rap videos were visual and descriptive.  They were usually best suited to songs that told vivid stories.  “Clap (one day),” the lead single from Pharoahe Monch’s upcoming album W.A.R(We Are Renegades), comes accompanied by striking video that would have surely generated controversy in an earlier era.  It shows just how much Pharoahe Monch has always stood out from his contemporaries.  He doesn’t care about generating controversy, only about conveying potent messages through compelling music.

On a cold winter’s morning, a cop receives a tip-off from a confidential informant as to the whereabouts of an alleged cop killer.  Three cops outfitted in S.W.A.T gear are then shown slowly making their way up a staircase to the apartment number provided by the informant.  In an adjacent room, Monch and his boys are in the middle of a recording session.  As the cops knock on the door, a mother and son are shown enjoying some leisure time.
As the cops burst into the domicile, the song begins.  They do a sweep of the immediate area.  Monch’s recording session leaves him oblivious to the chaos that is underway.  One of the officers attempts to restrain and silence the mother as she struggles furiously.  The cops check every nook and cranny of the apartment.  One of the cops performing the sweep hears movement in the bathroom and fires.  Monch, having taken a break from his recording, is alerted to the commotion.

The body of the little boy is then shown, two bullets having ripped through his torso.  One of the officers unmasks and looks upon the mother as she wails inconsolably.  Monch cracks open the door of the adjacent room.  He surveys the tragic scene and then looks the cop dead in the face.   The scene then shifts to the child’s funeral.  As the boy is laid to rest, his killer walks past the church, clearly haunted by his actions.  The pallbearers and mourners turn in the direction of the murderer and begin clapping.  This happens repeatedly wherever he goes.  People look upon him with an emotionless stare and begin clapping.
While riding on the subway, the strange sightings continue, only now the murderers palms begin to bleed profusely.  It’s a symbol of the blood that is on his hands.  Clearly disturbed, the killer exits the subway car in search of shelter from the demons that chase him.  He wanders the streets as day turns to night.  As he walks, a crowd of people amass behind him, dogging his every step.  He enters a snow covered park and is surrounded by people who clap incessantly.  A semi-automatic pistol magically appears in his hand.  He brandishes the weapon toward the crowd and then points it up in the air to fire a warning shot.  His day of reckoning is now at hand… 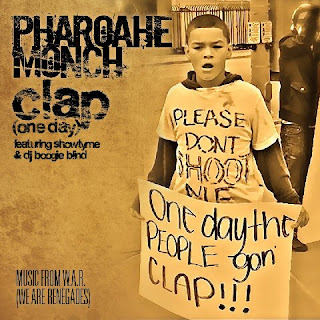 “Clap” was produced by M-Phazes.  The track itself is essentially hard hitting boom bap, with drums that are reminiscent of DJ Premiers signature style.  The sparse instrumentation consists of hypnotic and haunting organs.  The result is an unnerving blanket of noise that gets the head nodding but fills the heart with dread.  Lines from “JD’s Gafflin” off of Ice Cubes Amerikkka’s Most Wanted are scratched furiously.  Monch quotes Ice Cubes verse from “Fuck the Police,” but the energy he exhibits isn’t as inflammatory as that of N.W.A’s classic.  His verse is one of sputtering, frustrated anger, searching for a direction.  It’s effective to say the least.
The video, directed by Terence Nance, owes a bit to the urban thrillers of Antoine Fuqua.  There are many medium and tight shots that put the viewer in the middle of this dire situation.  The camera maintains a Zen like steadiness, calmly recording the chaos but never becoming a part of it.  Gbenga Akinnagbe (better known as the character Chris Partlow from The Wire), stars as the murderous policeman.  The accompanying musical score by Lion Share Music Group is appropriately haunting.
“Clap (One Day)” is a harrowing and unforgettable experience.  It sears itself to the viewer’s consciousness.  Pharaohe Monch wants his listeners to contemplate the more disheartening elements of ghetto life.  If any good has come from the current disheveled state of the music business, it’s that vets like Monch now see their way clear to take their art in daring new directions.  The video for “Clap (one day)” will hopefully give Monch some much needed shine.
Posted by Unknown at 10:16 PM