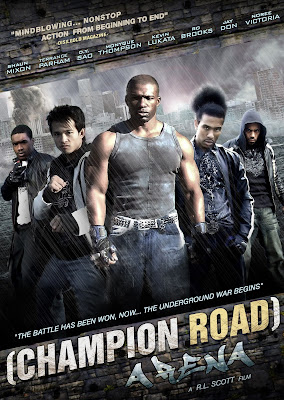 Modern blockbusters have become increasingly complacent, offering action sequences that are often satisfied by meeting the bare minimum rather going that extra mile to truly wow audience.  Thankfully, there are a number of talented individuals that continue their grind below Hollywood’s radar.  These unsung heroes have to be inventive and resourceful, as they do not have the benefit of exorbitant budgets and big name stars.  Such limitations, when placed on those who are truly talented and dedicated, can be a blessing in disguise.  They sometimes result in some true gems emerging from the underground.
Champion Road: Arena, a sci-fi/martial arts action film from Shadow Multimedia Productions, appears to have the hallmarks of a hidden action gem.  I recently came across a red band trailer of a brief fight scene.  The story centers on a group of fighters entering a blood sport known as The Supreme Fighting Arena.  As they battle it out, nothing less than the fate of an entire city hangs in the balance.
The film is the result of a three way partnership between writer/director/producer R.L. Scott, Monyque Thompson Scott, and Shaun Mixon.  The fight choreography, which was done by R.L. Scott and lead actor D.Y. Sao, looks fast and brutal.  Undoubtedly, D.Y Sao’s expertise in Wushu came in quite handy.  The camera remains at a medium distance, but manages not to intrude on or obscure the action.  The tilted angles lend the fights a comic book/anime sensibility.  Each character seems to have an ample amount of back story to lend the action some dramatic weight.  The relentlessly cute Noree Victoria does double duty as a co-producer on the film as well as the character Star.  I have no idea as to the extent of her acting ability, but I would like to see more of her.
Champion Road: Arena looks like an interesting find, done with minimal resources and a lot of good action. That’s something I’m always game for.  Hollywood blockbusters are offering much less bang for the audience’s collective buck these days, so viable alternatives are becoming more and more necessary.  It seems that entities such as Shadow Multimedia Productions are stepping up the plate to appease a fan base starved for quality action.  I wish them luck.
CHAMPION ROAD: ARENA "RED BAND" TRAILER from R.L. SCOTT on Vimeo.
"CHAMPION ROAD: ARENA" CURRENTLY SEEKING DISTRIBUTION from R.L. SCOTT on Vimeo.