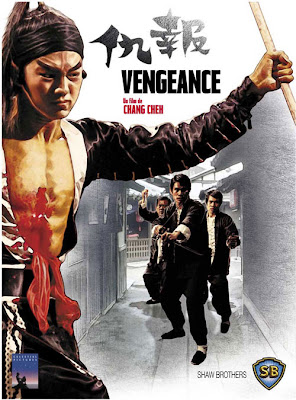 In the wake of Celestial Pictures acquisition of the Shaw Brothers catalog, my cinematic horizons have broadened considerably.  I had always associated the studio with highly entertaining but undeniably B-level filmmaking.  After doing some research over the past few years, I now realize that their extensive library was quite varied.  After interviewing a talanted filmmaker named Kantz, who happens to be an ardent fan of Shaw Brothers chief cinematic architect Chang Cheh, I was inspired to reconsider Changs work.  I’m glad I did, because I have discovered a real gem that makes one hell of an argument for his talents as a filmmaker.  It’s called “Vengeance!”
To say that the title of Vengeance! is self explanatory would be an understatement.  Kuan Yu-Lou (Ti Lung) is a gifted Peking Opera performer who is unfortunately married to a woman of questionable virtue.  When she is openly propositioned by local gangster Hua Ching-fen (Ping Wang), Kuan goes ballistic.  He gives a group of Hua’s henchmen a sound beating.  Not one to let such a slight go unpunished, Kua arranges for swift and public discipline to be administered.  Hua’s men ambush Kuan at a local restaurant.  Kuan fights valiantly but the knife wielding thugs overwhelm him and stab him to death.  His brother Hsiao Lou (David Chiang) arrives in town and begins cutting a bloody swath through those responsible.  His rage is all encompassing as he leaves piles of bodies in his wake.
Vengeance! was released in 1970 to great acclaim.  It received many awards, and went a long way in establishing a more modern filmmaking style for Shaw Brothers studios.  The plot, while simple, brims with a feeling of consequence and inevitability.  The acting, often the most maligned element of classic chopsockies, is stagy and broad but sincere.  Star David Chaing’s role requires very little dialogue, but his presence is undeniable.
The most prominent color in the films visual palette is Red.  The screen is often drenched in stage blood.  Every confrontation contains a slashing and stabbing.  Vengeance! is often sited as the forerunner to the “Heroic Bloodshed” subgenre of Hong Kong action cinema, and it’s easy to see why.  David Chaing wields a knife just as handily as Chow Yun Fat wields twin semi-automatics, and endless hoards of henchmen spill out from every entryway just as they do in the films of John Woo.  Despite overcoming insurmountable odds such as these, the hero is not an invincible destroyer a la Zatoichi or Ogami Ittō.
Though the production values are antiquated, Vengeance! isn’t without refinement or an eye for composition.  Yes, the stage blood looks as fake as the day is long, but the fights are infused with such heightened emotion and desperation that they overcome the films cosmetic limitations.  As knives are drawn out preceding a fight, the viewer winces in anticipation of something awful.  The fight scenes contain little in the way of intricate martial arts choreography.  There are lots of holds and throws and some grappling, but no fancy pugilism.  These are out and out scraps, with characters writhing on the floor and fighting like dogs.
The shots are framed beautifully, adding to the films operatic grandeur.  A few shots are rendered shakily as the camera follows characters from a distance as they walk along dirt roads or up staircases, but that doesn’t detract from the deliberate feel of the films visual composition.  Where the camera seems stationary in Chang’s later films, here it roams along on a smooth and even path, slowly pulling back to reveal characters that are hopelessly outnumbered.  Chang makes some rather bold and artful choices with the editing.  Kuan’s death is juxtaposed with that of one of his stage characters during a performance.  This emphasizes both the operatic grandeur of the proceedings and Chang’s grasp of film language.
Vengeance! makes it clear that Chang Cheh was an honest to God filmmaker, and a great one at that.  Even without the acrobatics of the Venoms team, Chang knew how to hold an audiences interest from a visual standpoint.  He didn’t need to rely on gimmicky plots or fight scenes.  Vengeance! is an effective revenge/crime picture masquerading as an early chopsocky, and Chang Cheh is the greatest filmmaker that many have never heard of.
Posted by Unknown at 1:41 PM